Listed by Trip Codes. Ship and Cabin info and bottom of page.

This trip is great for the geologist because it aims to visit the active volcano of Deception Island. This is one of only 2 active calderas in the world that a ship can sail right into. Deception Island is in the South Shetland Islands and after visiting these islands we proceed south to the main continent of Antarctica.

GeoWorld Travel Director James Cresswell has done it many times! 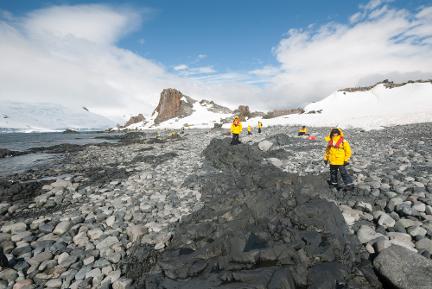 A dolerite dyke on Half Moon Island, South Shetlands 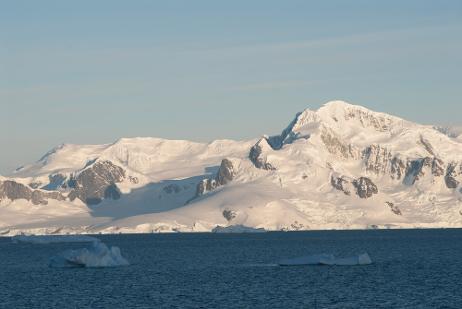 The scenery in 'High Antarctica' Spigot Peak in the Ererra Channel 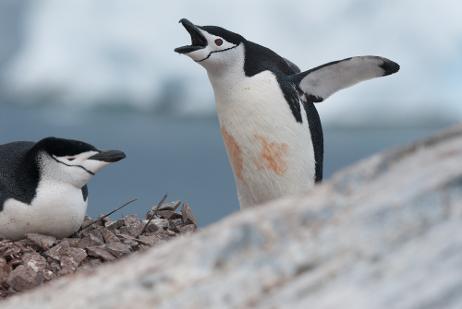 A chinstrap penguin in Antarctica 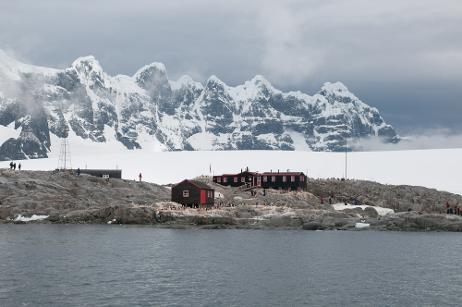 A typical itinerary to the Antarctic Peninsula and South Shetland Islands  is illustrated below. All itineraries are for guidance only. Programs may vary depending on local ice and weather conditions, the availability of landing sites and opportunities to see wildlife. The final itinerary will be determined by the Expedition Leader on board. Flexibility is paramount for expedition cruises.

Days 2 & 3: at sea - During these two days we sail across the Drake Passage. When we cross the Antarctic Convergence, we arrive in the circum-Antarctic up welling zone. In this area we may see Wandering Albatrosses, Grey Headed Albatrosses, Black- browed Albatrosses, Light- mantled Albatrosses, Cape Petrels, Southern Fulmars, Wilson’s Storm Petrels, Blue Petrels and Antarctic Petrels. Near the South Shetland Islands, we spot our first icebergs.

Days 4 – 7: Antarctica - We will sail directly to “High Antarctica”, passing the Melchior islands and the Schollaert Channel between Brabant and Anvers Island.  On Cuverville Island, a small precipitous island, nestled between the mountains of the Antarctic Peninsula and Danco Island, we will find a large colony of Gentoo Penguins and breeding pairs of Brown Skuas. If we land on Danco Island we can observe Gentoo Penguins and possibly Weddell and Crabeater Seals. In Neko Harbour we will have the opportunity to set foot on the Antarctic Continent in a magnificent landscape of huge glaciers calving at sea level. We enjoy the landscape surrounded by alpine peaks during zodiac cruises. In Paradise Bay again with its myriad icebergs, we have the opportunity to set foot on the Antarctic Continent again. We shall have the opportunity for a zodiac cruise in the inner parts of this amazing water way. In this area we have good chances to see Humpback Whales and Minke Whales. After sailing through the Neumayer Channel, we hope to get a chance to visit the old British research station, now living museum and post office at Port Lockroy on Goudier Island. Close to Port Lockroy we may also offer a landing on Jougla Point with Gentoo Penguins and Blue-eyed Shags.

On our way North through the Gerlache Strait we finally arrive at the South Shetland Islands. We will sail to Deception Island. Our ship braves its entrance into the crater through the spectacular Neptune’s Bellow into the ring of Deception Island. We hope for a good long walk and kayak trip which will depend on site availability and weather conditions.

Deception is a sub-ducted crater, which opens into the sea, creating a natural harbour for the ship. Here we find hot springs, an abandoned whaling station, thousands of Cape Petrels and many Kelp Gulls, Brown and South Polar Skuas and Antarctic Terns. Wilson’s Storm Petrels and Black-bellied Storm Petrels nest in the ruins of the whaling station in Whalers Bay.

We leave from here and sail to Half Moon Island where we will find Chinstrap Penguins. Weddell Seals often haul out on the beach. These volcanic islands of the South Shetlands are windswept and often shrouded in mist and fog, but do offer subtle pleasures. There is a nice variety of flora (mosses, lichens and flowering grasses) and fauna, such as Gentoo Penguins, Chinstrap Penguins and Southern Giant Petrels. Our voyage continues through a narrow Strait to the open sea with direction Ushuaia.

Days 8 – 9: At sea - On our way north we are again followed by a great selection of seabirds while crossing the Drake Passage.

Day 10: Ushuaia - We arrive in the morning in Ushuaia and disembark.