Spitsbergen is the largest island in Svalbard and has a fascinating geology spanning the last 1 billion years. It is also the most accessible place in the Arctic. This is a classic trip that circum-navigates the main island of Spitsbergen with plenty of opportunity to learn about its geology, glaciology, history and to encounter wildlife.

Getting up close to a walrus on a zodiac cruise

Hornsund has some of the best geology in Svalbard

Dark basalt overlies pale rock that has been changed to marble due to the contact metamorphism. 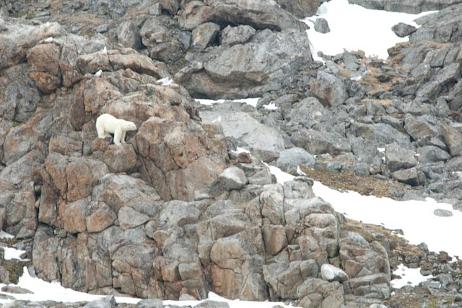 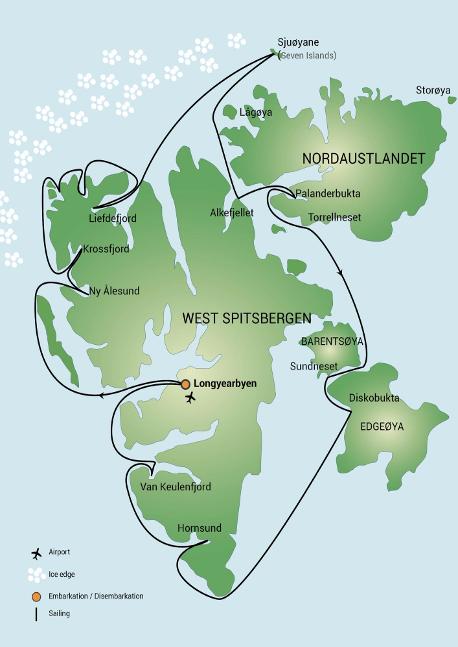 Day 1 - Arrive in Longyearbyen, the administrative capital of the Spitsbergen archipelago of which West Spitsbergen is the largest island. Before embarking there is an opportunity to stroll around this former mining town, whose parish church and Polar Museum are well worth visiting. In the early evening the ship will sail out of Isfjorden.

Day 2 - Heading north along the west coast, we arrive by morning in Krossfjorden, where we board the Zodiacs for a cruise along the sculpted front of the 14th of July Glacier. On the green slopes near the glacier, a colourful variety of flowers bloom, while large numbers of Kittiwake and Brünnich’s Guillemot nest on the nearby cliffs. There is also a good chance of spotting Arctic Fox, who patrol the base of the cliffs in case a chick falls from its nest, and Bearded Seal, who cruise this fjord. In the afternoon we sail to Ny Ålesund, the world’s most northerly settlement.

Once a mining village - served by the world’s most northerly railway, which can still be seen - Ny Ålesund is now a research centre. Close to the village is a breeding ground for Barnacle Goose, Pink-footed Goose and Arctic Tern. Visitors interested in the history of Arctic exploration will want to walk to the anchoring mast used by Amundsen and Nobile, in the airship Norge in 1926 and Nobile in

the airship Italia in 1928, before their flights to the North Pole.

Day 4 & 5 - We have our northernmost landing at Phippsøya, in the Seven Islands north of Nordaustlandet. Here we will be at 81 degrees north, just 540 miles from the geographic North Pole. Polar Bear inhabit this region, along with Walrus and Ivory Gull.  We may sit for several hours in the pack ice, taking in our spectacular surroundings with their own wildlife. When the edge of the sea-ice is  tens of miles north of  the Seven Islands (mostly in August)  we will spend a  second day to get to and in the sea ice.  Alternatively (mostly in July) we turn to Sorg Fjord where we may find a herd of Walrus not far from the graves of 17th century whalers. On a nature walk, we may encounter families of Ptarmigans. The opposite side of the fjord is also a beautiful area for an excursion.

Day 6 - Today we will sail into Hinlopen Strait, home to Bearded Seal, Ringed Seal, Polar Bear, and Ivory Gull. We’ll navigate the ice floes of Lomfjordshalvøya in our zodiacs and explore the bird cliffs of Alkefjellet with thousands of Brünnich’s Guillemot. On the east side of Hinlopenstrait, we’ll attempt a landing at Augustabukta on Nordaustlandet, home to reindeer, Pink-footed Goose, breeding Ivory Gull, and Walrus.Near Torrelneset, we will explore the polar desert of Nordaustlandet, next to the world’s third largest ice cap, which meets the sea nearby. We will walk along beautiful coastline covered in smooth rocks, sculpted by the surf over thousands of years. We may encounter Walrus along the way.

Day 7 - In Freemansundet we plan to land at Sundneset on the island of Barentsøya to visit an old trapper's hut and then take a brisk walk across the tundra in search of Spitsbergen Reindeer and Barnacle Goose. Later we cruise south to Diskobukta on the west side of Edgeøya. After a Zodiac cruise through the shallow bay, we land on a beach littered with whale bones and tree trunks, which have drifted here from Siberia. We can also climb to the rim of a narrow gully which is inhabited by thousands of Kitttiwake, together with Black Guillemot and piratical Glaucous Gull. During the breeding season, the base of the cliffs is patrolled by Arctic Fox and Polar Bear, especially females with young cubs, searching for young birds that have fallen from the nesting ledges.

Day 8 - We start the day quietly cruising the side fjords of the spectacular Hornsund area of southern Spitsbergen, enjoying the scenery of towering mountain peaks. Hornsundtind rises to 1,431m, while Bautaen shows why early Dutch explorers gave the name ‘Spitsbergen’ - pointed mountains - to the island. There are also 14 magnificent glaciers in the area and very good chances of encounters with seals and Polar Bear.

Day 9 - Today we land on Ahlstrandhalvøya at the mouth of Van Keulenfjorden. Here piles of Beluga skeletons (the Beluga is a small white whale), the remains of 19th century slaughter, are yet another reminder of the consequences of thoughtless exploitation. Fortunately, Beluga were not hunted to the edge of extinction and may still be seen locally. Indeed, there is a good chance that we will come across a pod. Cruising into Recherchefjorden during the afternoon we can explore an area of tundra at the head of the fjord where many reindeer feed.

Day 10 - Return to Longyearbyen and disembark for the transfer to the airport and the flight to Oslo and home.