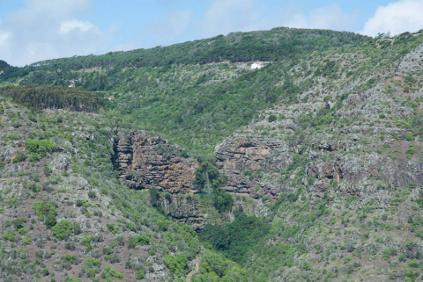 The view of Lot and behind Lot's wife and daughters 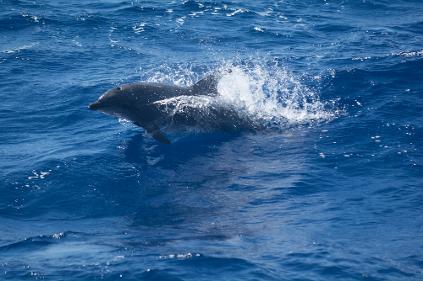 A dolphin on the boat tour 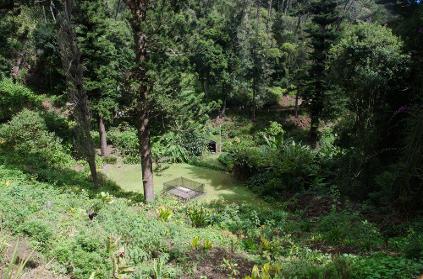 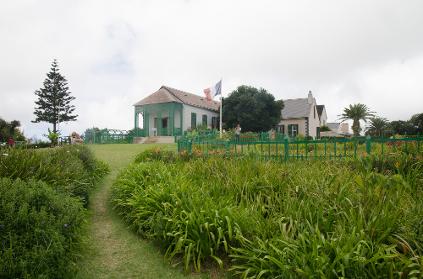 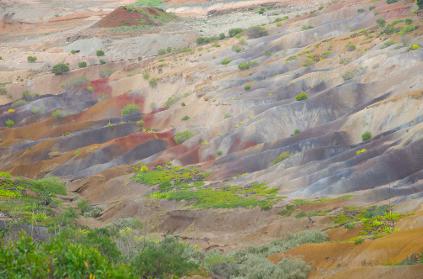 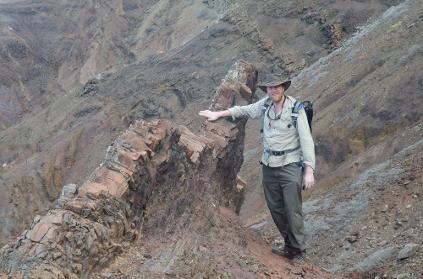 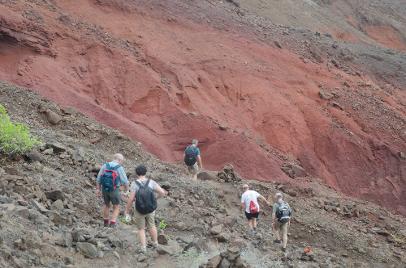 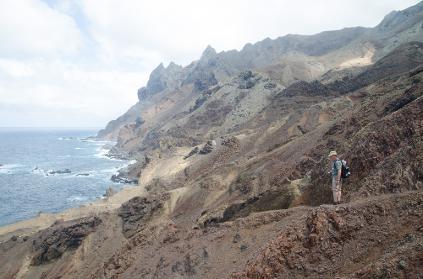 Hiking into the 'Gates of Chaos'

Day 2. Morning tour of the historic capital Jamestown which can include climbing Jacob's Ladder which is a great place to check out the flows of lava that make up the island. In the afternoon we walk from Jamestown, along James' Valley to the 'Heart Shaped' waterfall. This would have been one of the first land marks to have been discovered when early explorers landed in 1502. This walk is an easy 7km round trip.

Day 3. In the morning we visit Napoleon's Tomb and then journey on to his former residence Longwood House. In the afternoon we walk to Cox's Battery. This is a medium length walk with good views of Turk's Cap, The Barn, King and Queen Rocks and Prosperous Bay.

Day 4. Lot's Wifes Ponds. This is the most popular coastal walk on the island, and the views along the way are spectacular. The path cuts along some steep slopes and a narrow ledge. At the very end of the trail, we reach a viewpoint. From here it is optional to descend down to the Ponds themselves. There are ropes here, that are not really needed but can help you down. In the Ponds, which are formed from the splashing waves we can have a well earned swim. Afternoon we walk to Lot. This is a medium length walk mostly over vehicle tracks, it has spectacular views until we finally reach the volcanic plug that is Lot.

Day 5. Today is the midway day and we take a rest from the walking. In the morning we take a boat tour along the coast. On this tour we get magnificent views of dykes cutting through the lava layers, and also get the opportunity to see many species of bird, dolphins, flying fish and if we are lucky whale sharks. In the afternoon we travel to Plantation House, the residence of the Governor of St Helena and see the Giant Tortoises that live in the grounds. We then visit St Pauls Cathedral

Day 6. Diana's Peak. We travel by car to our starting point, then climb up to the highest point of the island. Here we have excellent views and can learn about an extraordinary ecology of the island. In the afternoon we visit the BellStone and walk to the Great Stone Top.

Day 7. The Barn. This is one of the most challenging walks on the island and we will spend all day doing it. We first cross the DeadWood Plain, before entering the area which was the eruptive centre of the North West Volcano. Here there are many impressive geological features. The route ends on top of a huge volcanic bluff with panoramic views across the east end of the island.

Day 8. Depart. Flights to Johannesburg and on to the rest of the world.

Saint Helena's remoteness made it the ideal location for the British to imprison Napoleon Bonaparte. The island is the United Kingdom's second oldest possession after Bermuda and was originally settled by English colonists in 1659.  The capital of Saint Helena is Jamestown.

Saint Helena has been formed by a hotspot. . The island of Saint Helena is an extinct shield volcano that has not erupted in the last 7 million years. It was once very much larger than today. The current maximum height of the island is just 820 metres but it was once between 1,200 and 1,500 high and 20 cubic kilometres of rock have been removed by erosion. By volume the island of Saint Helena only represents the top 5% of this Shield Volcano, the remaining 95% is below sea level and the volcano sits on an ocean floor that is 4.4 km deep. The basal diameter of the volcano is 130 km.

Charles Darwin visited Saint Helena in 1836 on the return leg of his around the world voyage on the Beagle. Writing about the island he remarked:

“St. Helena, situated so remote from any continent, in the midst of a great ocean.... excites our curiosity”

He also made a very good first attempt at describing the geology of the island. He described a basal sequence of submarine lava flows, underlying a series of basaltic lava flows, which is indeed the case. He also correctly considered the trachyte stocks that form Lot and Lot's Wife to have intruded after the cessations of eruptions. However he hypothesised that the volcano had one eruptive centre, centred on the Sandy Bay area and geologists now know Saint Helena had two eruptive centres.

The North East eruptive centre is the oldest eruptive centre on the island. The oldest rocks from this centre are the submarine breccia as Darwin correctly identified. The breccia is between 14 and 15 million years old and is up to 400 m thick and consists of small boulders up to 1.5 m across of basalt and trachyte, with a green-brown coloured matrix. Approximately 14 million years ago the island emerged from the waves and from 11 to 14 million years ago subaerial lava flows were deposited on top of the marine breccia. A good place to see these lavas flows is in Jamestown itself. If looking at the town from the sea these lavas form the left handside of the valley.

11 million years ago the eruption from the North East Volcanic Centre stopped, apart from some localised flows 9 million years ago, and the eruptive activity switched to the South West Volcanic Centre, see figure 33. Initially these eruptions were centred on the Sandy Bay area, see figure 35, but the present day amphitheatre is not the ancient crater as Darwin hypothesised rather an erosional feature. The lava of the Lower Shield is up to 600m thick and is aged from 10-11 million years old. It is formed by four distinct units each consisting of a lava flow overlain by a pyroclastic layer. The Lower Shield Lavas can be seen outcropping in the Sandy Bay and the Gates of Chaos.

The lava flows of the Main Shield are 800m thick mainly made of basalt and cover the greatest area of the island. Sedimentary layers between the lava layers are common. A very good place to see these lava layers is by climbing Jacob's Ladder in Jamestown which is on the right hand side of the valley if looking from the sea. Jacob's Ladder is the must see tourist attraction in Jamestown and has 699 steps. It was originally built to link Jamestown with the former fort on Ladder Hill. Another good place to see the lava flows of the Main Shield is the Heart Shaped Waterfall.

Around 9 million years ago there was a brief pause in eruptions from the South West Volcanic Centre and the eruptive centre moved slightly to the Peaks, the current summit of the island. From here the lavas of the Upper Shield were erupted and in places these lavas are seen infilling erosional channels cut into the Main Shield.

Around 8 million years ago the eruption of the Upper Shield lavas had finish, and trachyte, dykes, stocks as well as some unusual celery shaped intrusions were emplaced. The most iconic landforms on St Helena: Lot, Lot's Wife and Daughters, the Ass's Ears and Frightus Rock were all formed this way. They consist of harder rock and have been left exposed as wonderful sculptures after the softer rock had been worm away. Then finally around 7 million years ago a small amount of lava was further erupted and all activity ceased. Since then the sea has been gradually reclaiming Saint Helena, eroding it down until eventually it will become a submerged sea mount showing where the hotspot once used to be.