Iceland is geologically unique - a mid-ocean spreading ridge is uplifted above the ocean surface by a mantle hotspot, all set in a sub-Arctic location. This creates a volcanic and geothermal wonderland, with thundering waterfalls draining from the largest glaciated areas in Europe. With volcanic eruptions occurring on average every four to five years, Iceland really is the vulcanologist’s dream. The GeoWorld Travel tour does a complete loop of the island taking in all the natural sites, with expert geological interpretation along the way. In addition, there are two side trips from the loop: the first to Westman Islands and the second to Askja, in Iceland’s interior. 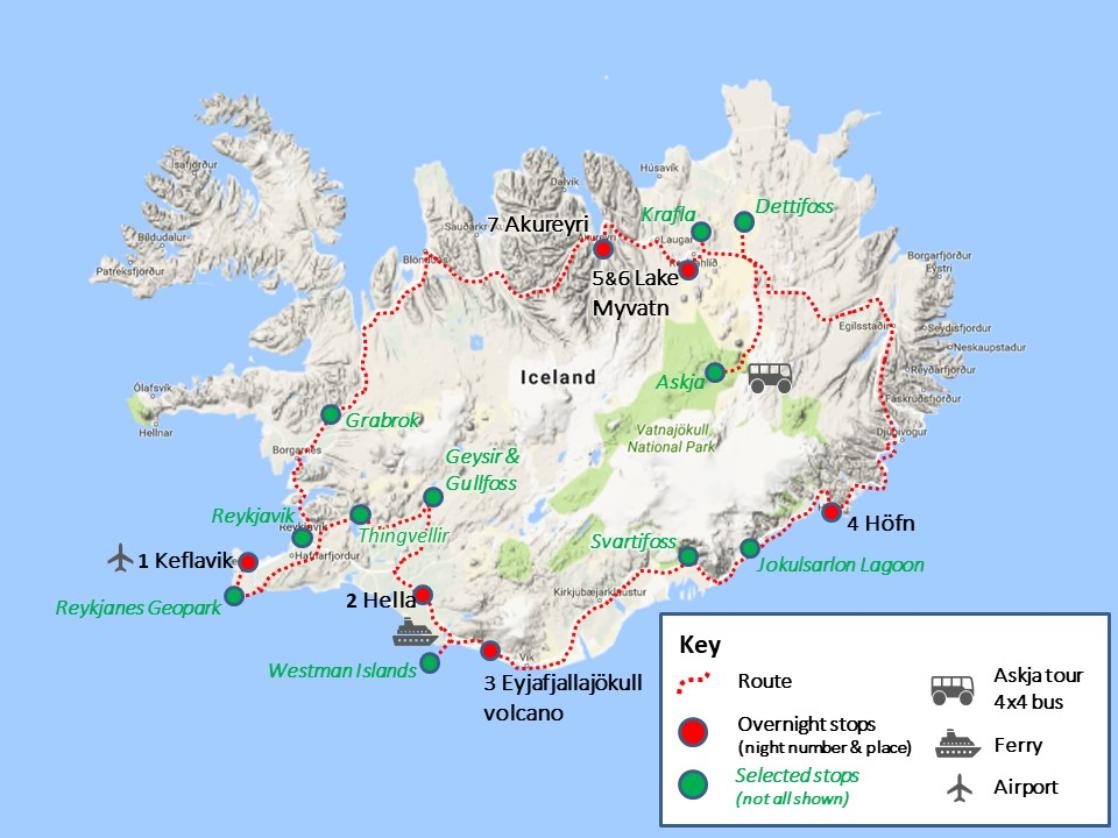 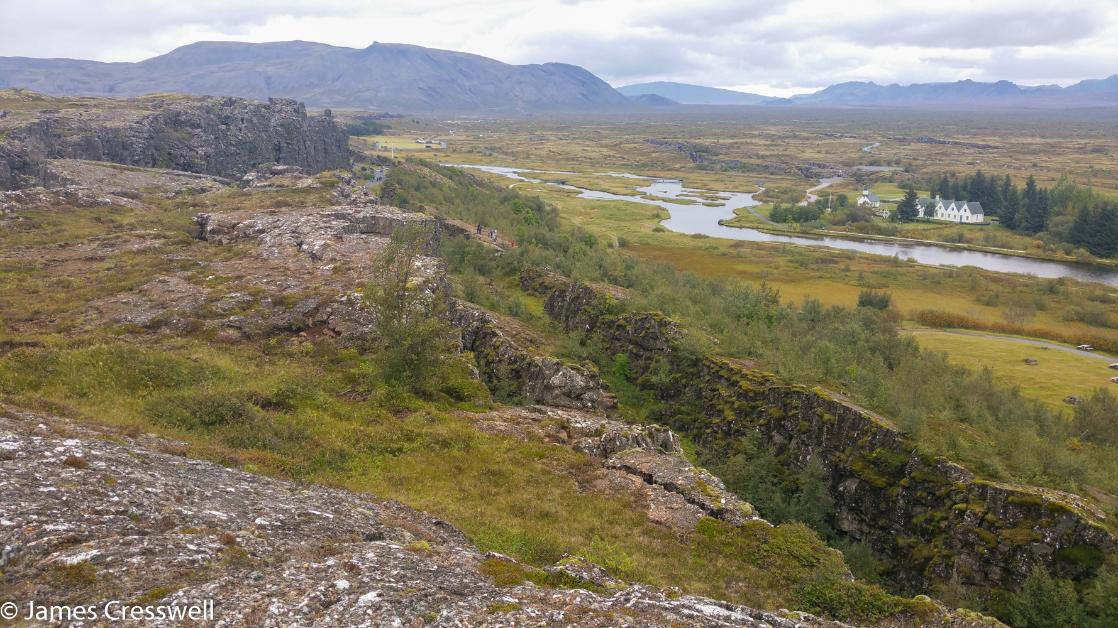 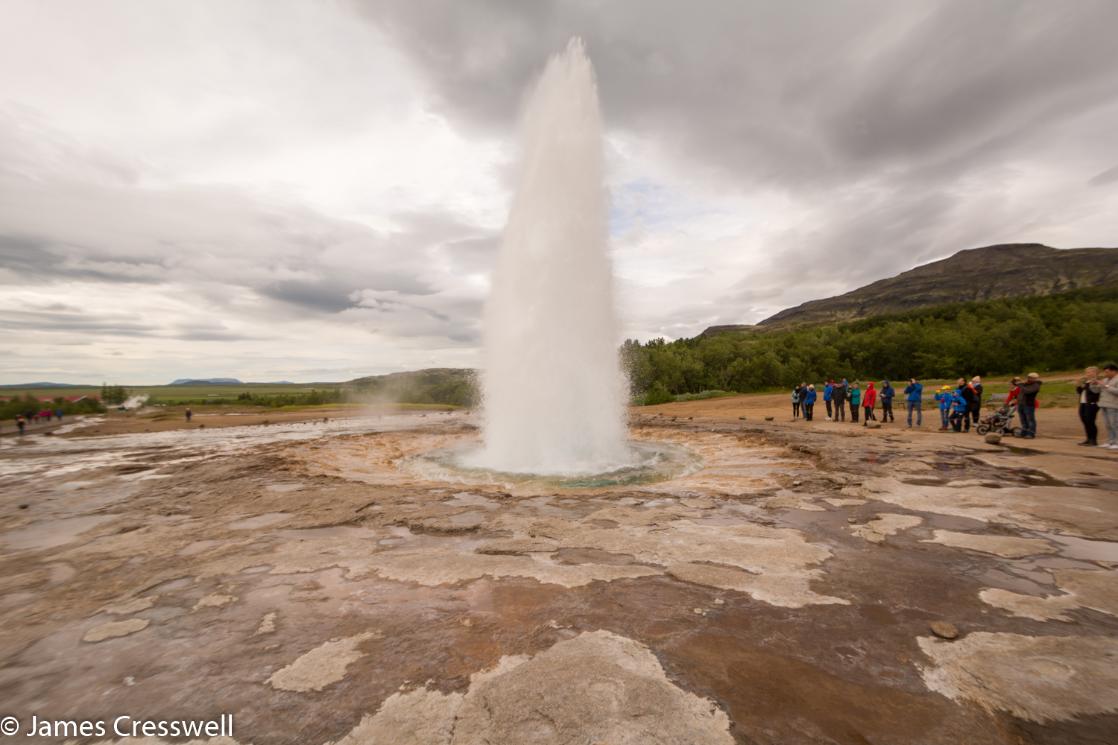 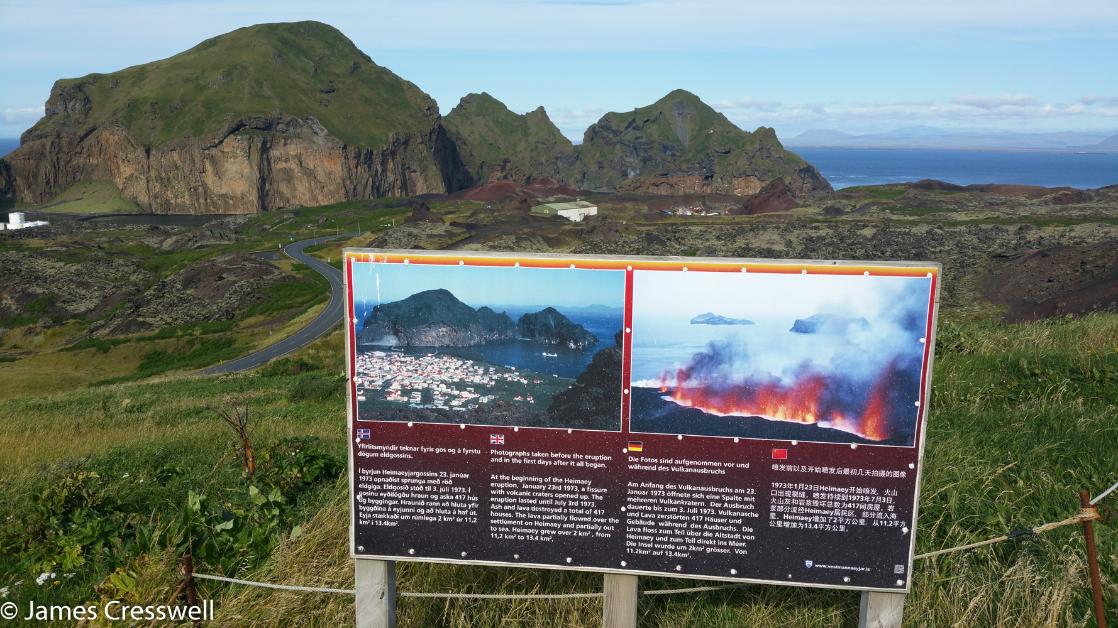 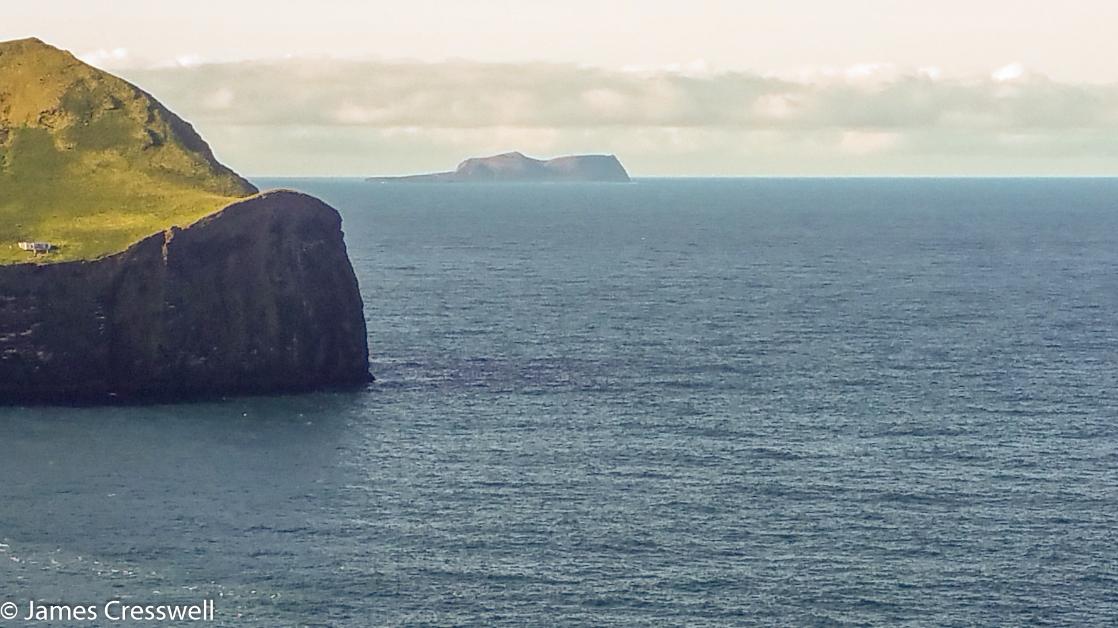 A view of Surtsey from the southern tip of Heimaey. Surtsey a UNESCO World Heritage Site was 'born' in 1967 when it emerged during a subsea volcanic eruption. It now lends its names to all such eruption types. (Day 3) 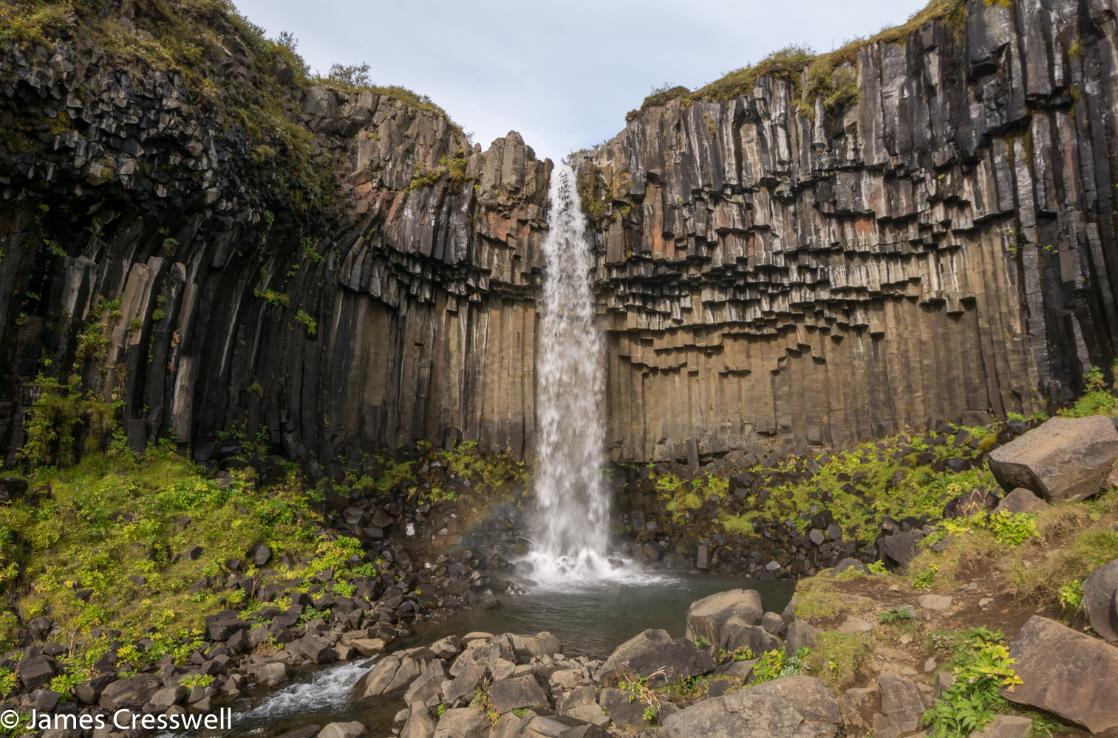 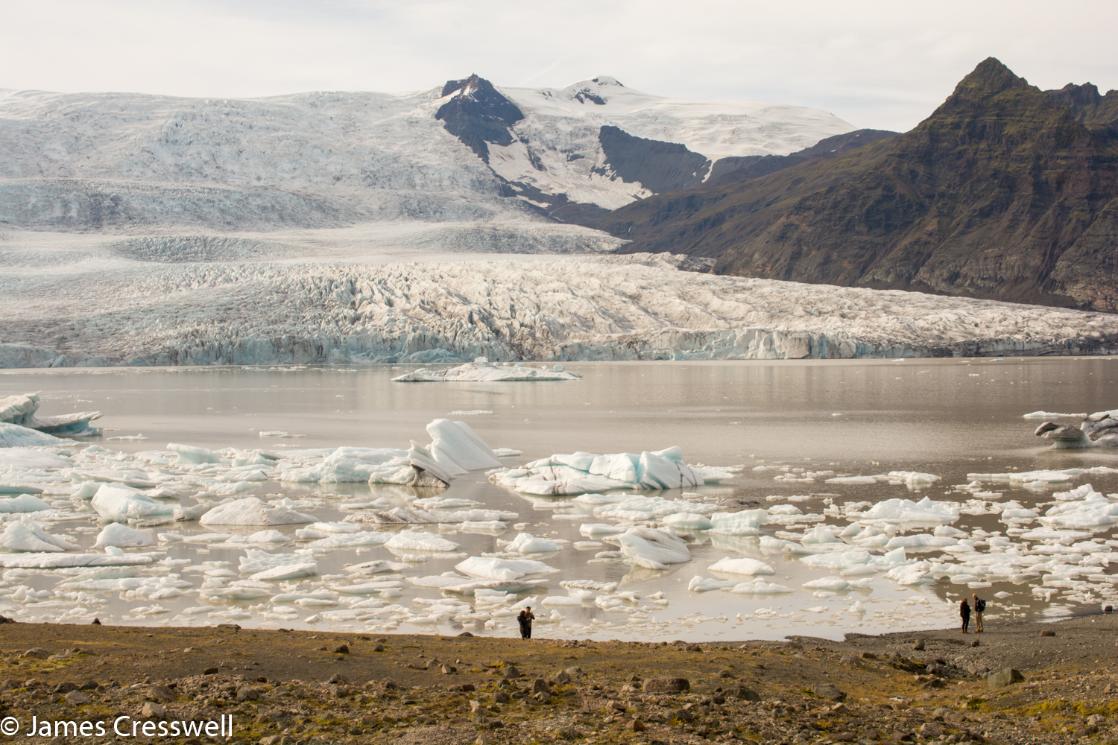 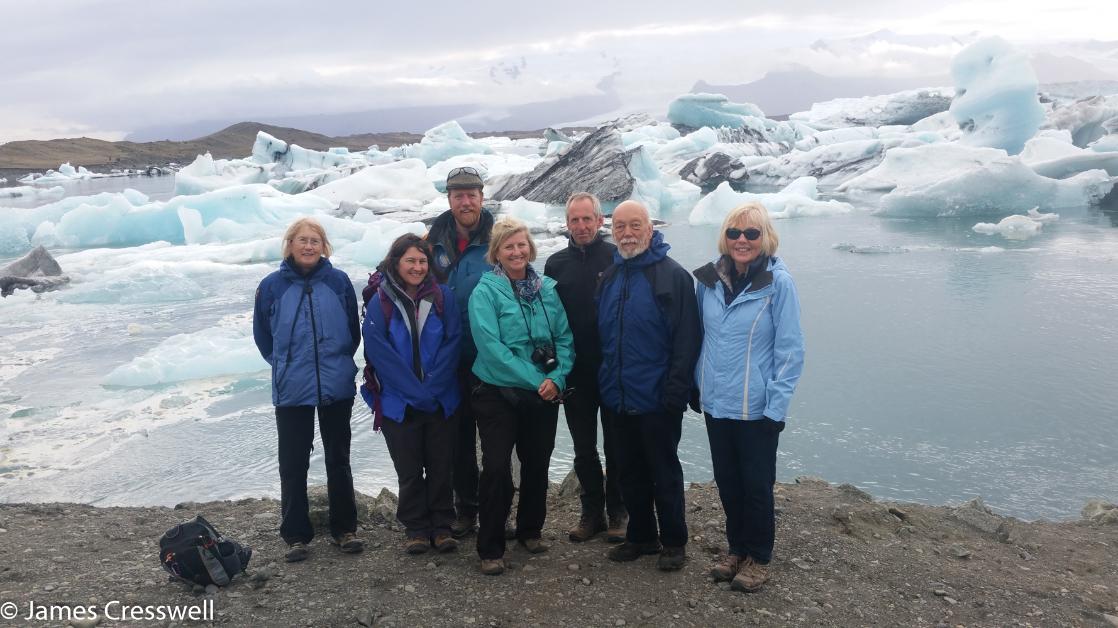 A GeoWorld Travel group at Jokulsarlon lagoon, with icebergs in the background (Day 4) 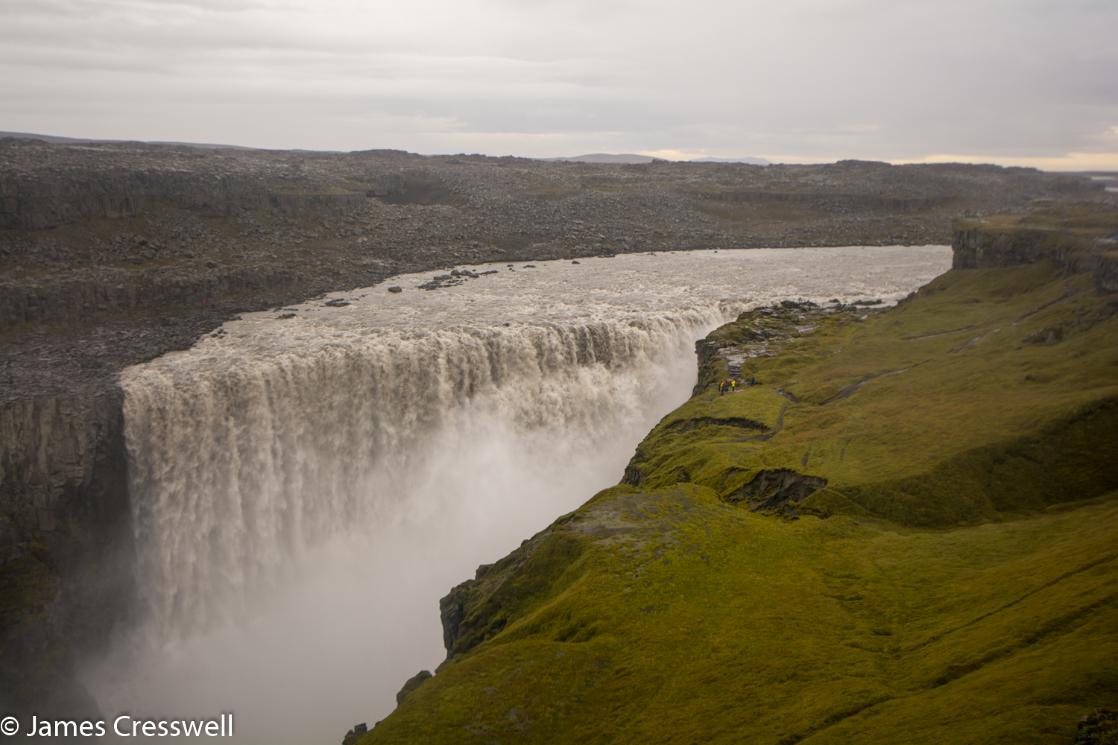 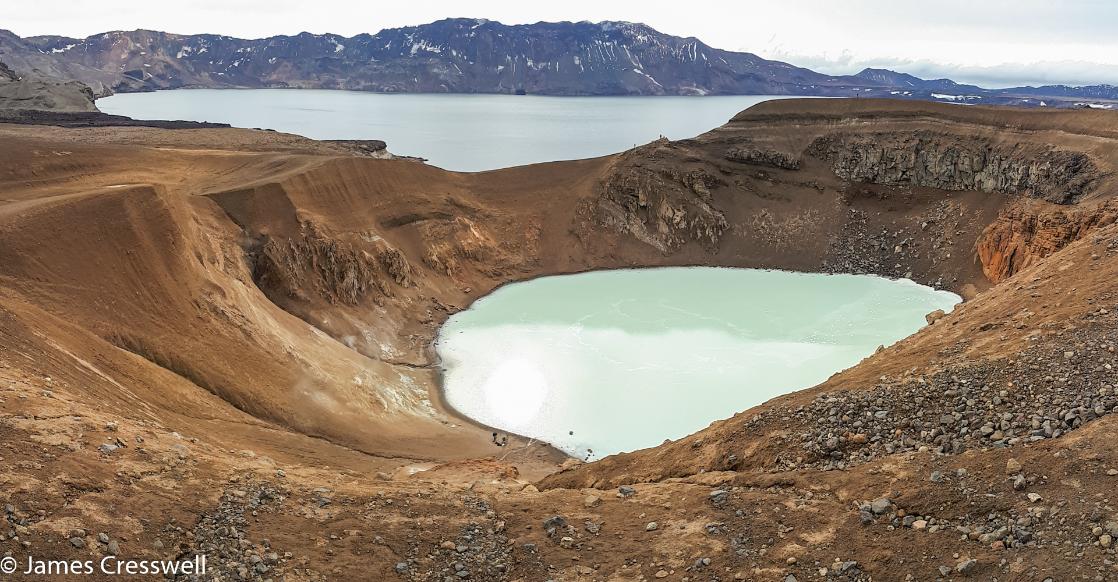 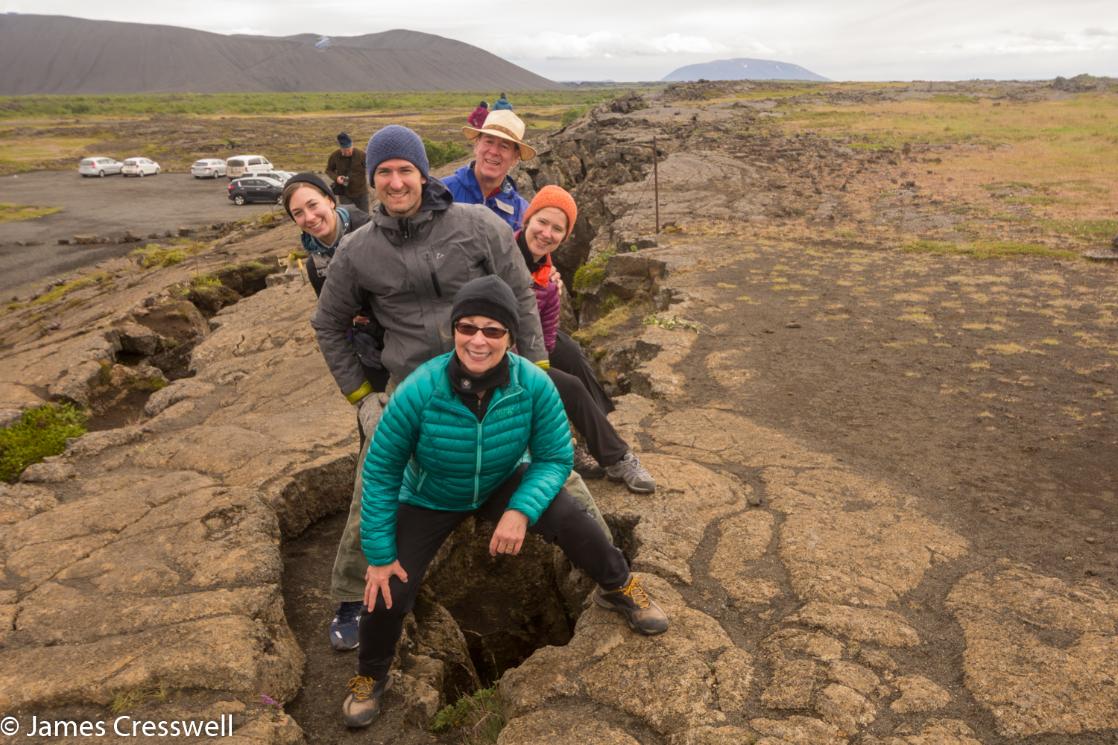 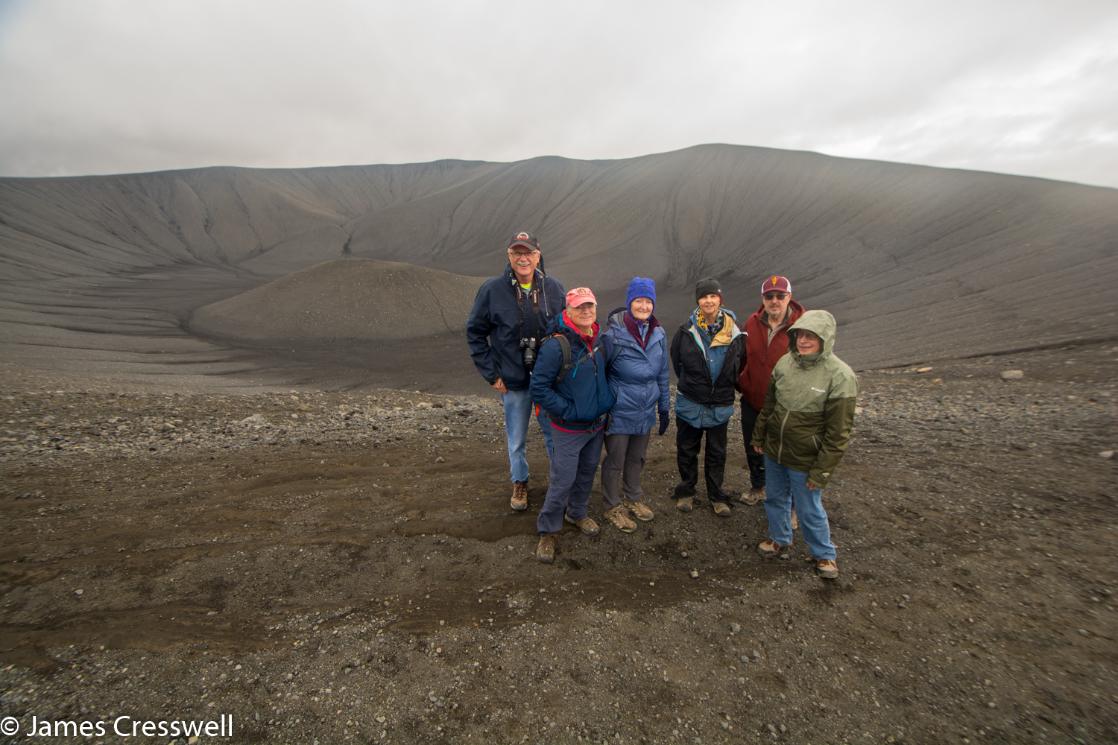 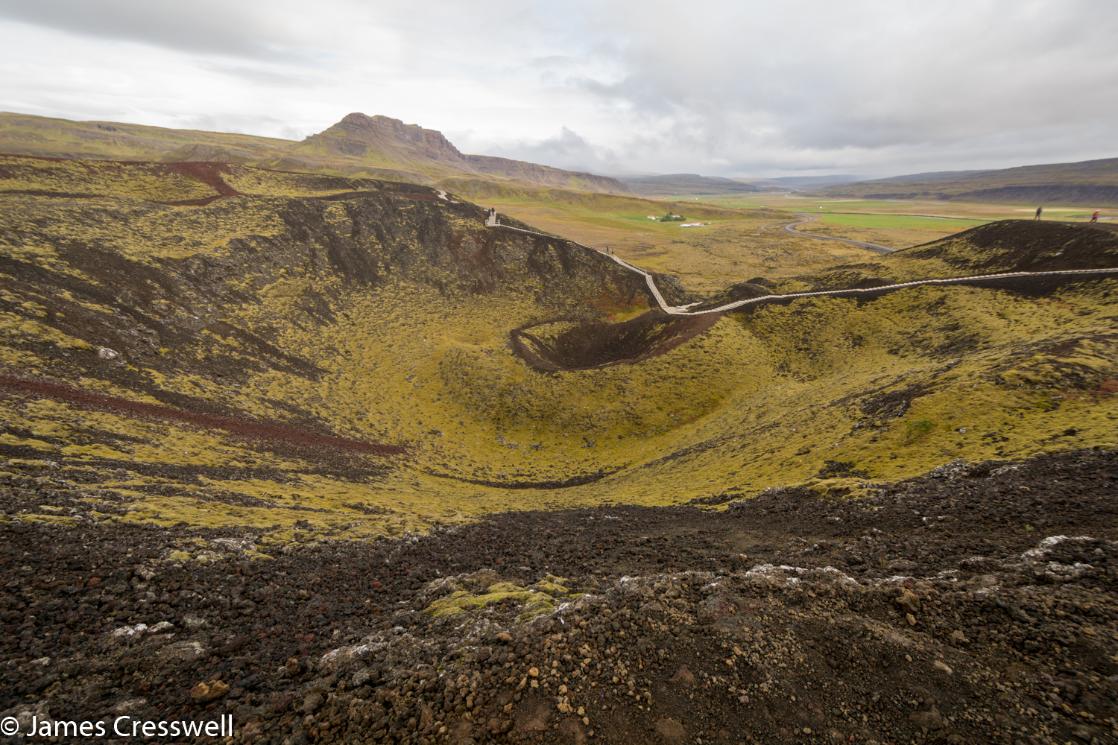 Day 1. Arrival in Iceland. We will spend our first night in Keflavik, the location of Iceland's international airport, 22 miles west of the capital Reykjavik. Keflavik is inside the Reykjanes Geopark an area of great geological interest, which we will explore the following day.  If you want to explore Iceland under your own steam outside this tour, we recommend that you do this at the end, as the tour finishes in Reykjavik city centre.

Day 2. The Reykjanes Geopark and the Golden Circle. The first stop of our tour will be the Bridge Between Continents which spans an extension fault that is part of the Mid-Atlantic Ridge. We then visit Reykjanes, the place where the Mid-Atlantic Ridge rises out of the North Atlantic, and we will also see some fumeroles nearby. The next stop is Krysuvik which has hotsprings and an old sulphur mine. We leave the Reykjanes Peninsula and head inland passing Reykjavik to reach Thingvellir National Park a UNESCO World Heritage Site. Here the crest of the Mid-Atlantic Ridge can again be seen where the North American plate is pulling apart from the European plate, and it is possible to walk inside a fissure. This is also the site of Iceland's first Parliament. We then move on to Geysir,  from which all geysirs around the world are named. This is followed by a visit to the nearby water fall of Gullfoss. The night is spent in the small town of Hella where we spend the night. The town has restaurants and a supermarket.

Day 3. Vestmannaeyjar (Westman Islands). Today we take an early ferry across to the island of Heimaey where we see how the 1973 eruption destroyed many buildings in the town but we will also learn how the town was saved with 6.8 billion litres of cold sea water. A highlight of the island is the Eldheimar Museum which is built over houses that were buried by the eruption and have since been excavated. The fitter members of the group can also climb to the summit of Eldfell volcano which was created in the eruption. From there, if the weather is fine, we will get views of the famous newly-born island, Surtsey which is a World Heritage Site. We will have our vehicle with us on Heimaey so we will also drive to the southern point of the island to view the geology there.  In the late afternoon we will take the ferry back to the mainland and will see the Seljalandsfoss waterfall, before driving along the southern flank of the Eyjafjallajökull volcano which famously grounded European flights when it erupted in 2010. Our hotel for the night, is close to Skogafoss waterfall.

Day 4. South Iceland & Vatnajökull National Park & World Heritage Site. Our first stop is Skogafoss waterfall. We then visit Petursey an old volcano which once erupted out of the sea just like the island of Surtsey but became joined to the mainland by subsequnt deposits of ash from nearby Katla volcano. We then visit Reynisfjara Beach, one of the best places in Iceland to see columnar basalt. We then journey on through the town of Vik and cross the Laki lava fields, learning about these eruptions, to reach  Mt Lomagnupur, the highest cliff face in Iceland. This 767m cliff has been calved out be glacial and coastal erosion and lies at the edge of the great outwash plain of the Vatnajokull icecap called Skeidararsandur. After crossing Skeidararsandur, we park at Skaftafell to visit the Vatnajökull  National Park Visitor Centre and take a short uphill hike on an easy path to the famous Svartifoss waterfall which cascades over columnar basalt. Our journey then takes us on by road around the Öraefajokull volcano which is the highest mountain in Iceland. We stop at one of its outlet glaciers to see rhyolite and obsidian. We then have a brief stop at Fjallsarlon glacier before reaching the famous Jokulsarlon Lagoon. This is the only place in Iceland where a glacier reaches the sea and little icebergs break off and can wash up on the nearby beach. We then continue past several more outlet glaciers to reach our overnight stop, the town of Hofn, which has restaurants and supermarkets.

Day 5. East Iceland and Dettifoss waterfall. Today we cover a long distance to get from the glaciated south-east to the volcanically active north-east. Our first 3 stops are at Eystrahorn where we are able to see the eroded inner workings of an old volcano including gabbro rocks that would have been the magma chamber. We then continue to a site near Berufjordur where we can view the inner workings of a rhyolitic  volcano and can walk up to an old eruptive vent. We can also visit the nearby Folaldafoss waterfall which flows over a basaltic dyke. Our drive then takes us right up the east of Iceland passing through the town of Egilsstadir to reach north-east Iceland. Our final stop of the day is the magnificent Dettifoss waterfall, which is the most powerful waterfall in Europe. We then journey on to Lake Myvatn where we will spend the next 2 nights. On arrival at Lake Myvatn we will visit the Myvatn Nature Baths, where we will have a light supper and bathe in hot volcanic waters, which many people say is better than the more famous Blue Lagoon near Keflavik. If you prefer not to bathe it is possible to rest in the cafe which has wifi.

Day 6.  Tour to Askja volcano, Vatnajökull National Park & World Heritage Site. The tour to Askja is a real highlight of this trip. The tour takes 11-12 hours on a 4x4 bus that is capable of fording several deep rivers to reach Iceland's largest wilderness. Askja is an enormous caldera and the central volcano in the Dyngjufjöll Mountains, north of Vatnajökull glacier, which was not explored until the nineteenth century. It is near to Iceland's most recent eruptions at Holuhraun. When the volcano erupted in 1875, it spewed out approximately 2 billion cubic meters of ash and pumice, and a new caldera was formed inside the older one. In the following decades the new caldera filled with water and it now contains the 11km² Lake Öskjuvatn, which is also one of the deepest lakes in Iceland (220m).

Day 7. Myvatn. The day is spent in the geologically active Myvatn area. Our first visit is the Krafla Volcano and the Viti (Hell) crater. We then visit We then visit the fumeroles, mud pools and mud pots at Hverir.  Next we visit more extension fissures of the Mid-Atlantic Ridge at the Grjótagjá Cave, before climbing the large Hverfjall tephra cone. We then walk around the Dimmuborgir lava fields which were once a lava lake but now display many fascinating towers and lava tubes, before visiting the rootless volcanic craters. After this amazingly volcanically active day we journey on to Akureyri the second city of Iceland and capital of the north where we spend our last night.

Day 8. West Iceland. Today we drive around the west of Iceland stopping at the Grabrok volcanic craters before arriving back at the airport hotel at the end of the day.

Day 9. Departure from Keflavik airport on international flights, or you may choose to stay longer in Iceland.

If you choose to stay in Iceland after the end of our trip, there are several interesting day tours that you could do from the Reykjavik area, including trips to the geologically interesting areas of Snaesfellness or Landmannalaugar, the Inside the Volcano tour, or you may choose to go Whale Watching.

This tour is packed with volcanoes

Text for the captions is taken from Smithsonian Institution Global Volcanism Program: https://volcano.si.edu/

A day by day account of the trip with captioned photos 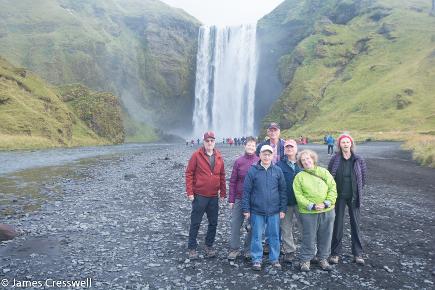 "I highly recommend GeoWorld Travel for anyone interested in geology.  They are based in Wales and owned by James Cresswell, a very experienced and widely traveled geologist.  The tours are small (4-8 people), personable and comprehensive but at a comfortable pace. Food and accommodations are reasonable I have been on 3 trips and look forward to more. The cost is one of the best values for the money."

Review was posted to us via email, April 2019

"James did an amazing job on our Iceland trip. He is excellent at explaining all the geologic formations we went to. He also seems genuinely concerned about everyones welfare during the entire trip."