Prices are per person, based on 2 people sharing a room.  Single supplement applies, please make contact for details. 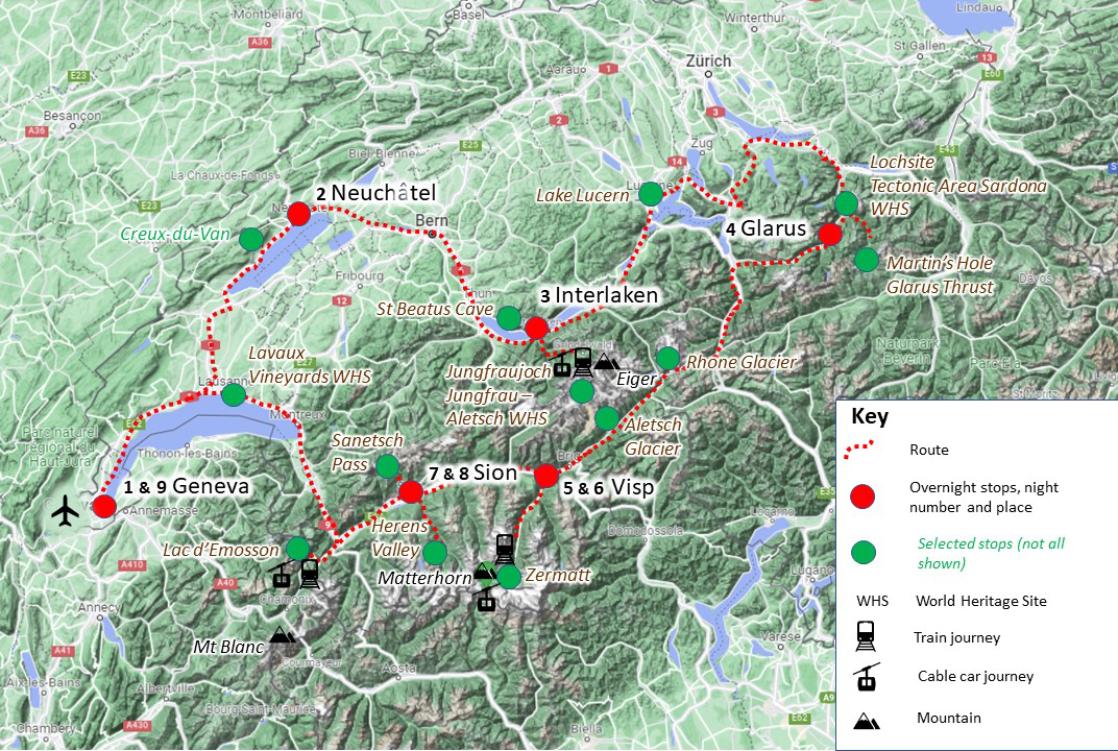 Day 3: The train passing in front of the north face of the Eiger on its way to Jungfraujoch the highest station in Europe, in the Jungrauu-Aletsch UNESCO World Heritage Site Day 1: Arrival in Geneva. We will be staying at a hotel near Geneva Airport and we will meet for a welcome meeting in evening at the hotel.

Day 2: Neuchatel and the Jura Mountains. Our tour starts by journeying along the shore of Lake Geneva, a glacial lake and the largest lake in the Alps which is partly in France and partly in Switzerland. We then reach another lake, Lake Neuchatel, which is the largest lake wholly in Switzerland. We leave its shores to climb up into the Jura Mountains that lend their name to the Jurassic Period. Our first stop is Creux-d-Van, a glacially eroded, horseshoe-shaped limestone cliff of enormous proportions. The vertical rock face is 160m high and surrounds a valley that is 4 km long and 1.4 km wide. At this site we learn about the folded structures of the Jura Mountains and get spectacular views to the Alps. Next, we visit a historically important glacial erratic named Pierre a Bot. The boulder originated in the Mount Blanc massif and was carried to its present position in the last Ice Age. Switzerland's most famous geologist, Louis Agassiz, used it to defend his theory of glaciation and requested it to be classified as a "precious monument of natural history". Next, we visit the nearby town of Valangin and see the type locality of the Valangian epoch of the Cretaceous period. The rest of the day is spent in Neuchatel where we take a town walk and visit the historic  Natural History Museum in Neuchatel, with which Agassiz also had strong connections. The night is spent in Neuchatel.

Day 3. The Top of Europe in Jungfrau – Aletsch World Heritage Site. Our first stop today is for a tour of St Beatus Cave. We then travel to Grindelwald in the Bernese Alps, where we can gaze on the gigantic 10km long north wall of the High Alps. Centred on the Eiger, Mönch and Jungfrau peaks, it is a scenically superlative and is globally recognised as the Swiss Alps Jungfrau-Aletsch World Heritage Site.  From Grindelwald we travel by train and/or cable car to the highest station in Europe, Jungfraujoch. The station lies at an elevation of 3,463m on a saddle between the Jungfrau and Mönch mountains. From the top we get incredible views of the most glaciated part of Europe including the Alps' longest glacier as well as a range of other classic glacial and geologic features. The whole day is spent in the area, with the night in nearby Interlaken.

Day 4. Lake Lucerne & the Tectonic Area Sardona World Heritage Site. In the morning we pass through the extraordinarily diverse landscape of Lake Lucerne stopping at several viewpoints to learn about the geology of the Pilatus, Stanserhorn, and Mythen mountains and the associated Penninic and Helvetic nappe systems. We also stop in the city of Lucerne to see a deposit of Molasse. At lunchtime we reach Glarus in the Tectonic Area Sardona Unesco World Heritage Site. The Tectonic Arena Sardona is recognized by UNESCO because it provides an exceptional display of mountain building tectonics and has been recognised as a key site for geological sciences since the 18th century. Its most famous exposure is the  Glarus Overthrust which we will spend the afternoon examining. Our fist stop in the area is arguably the most famous geological outcrop in Switzerland: Lochsite. Here 250-300 million-year-old rocks lie above younger, 35-50 million-year-old rocks. The site has been studied for over 200 years and has revolutionised the understanding of mountain building, with the recognition that overthrusting plays a key role. We then take the cable car from Elm to Tschinglen Alp to make a short hike to Firstboden for magnificent views of the Glarus thrust and Martin's Hole. The night is spent in Elm

Day 5. Rhone Glacier & Return to the Jungfrau – Aletsch World Heritage Site. Today we leave the Glarus region and drive over a high mountain pass, the Klausen Pass (1,948m). Here we stop for magnificent views and learn about the thrust faults before continuing to the Rhone Glacier. The Glacier is the source of the River Rhone and due to its accessibility next to the road has a well documented response to climate change. It has retreated 1,300m in the last 120 years! Next we arrive in the town of Fiesch and by way of two cable cars return to the Jungfrau - Aletsch World Heritage Site. At the Eggishorn viewpoint we gaze down up the Aletsch glacier from a midway point (see photo). The Aletsch Glacier is the largest, longest and most famous glacier in the Alps. We then stay in nearby Visp for the next two nights.

Day 6. Zermatt & The Matterhorn. Today we take a train to the famed mountaineering and ski resort of Zermatt. The village lies on ophiolitic rocks that formed beneath the oceanic crust of the ancient Tethys Ocean. Towering above the village is the Alps' most iconic peak the Matterhorn, a rocky pyramid in superb isolation from surrounding 4000m peaks. The rock itself has an African origin and the Zermatt region allows us to learn all about the European African collision that closed the Tethys ocean and forced up the Alps. We take Europe's highest cable car to just below the 3,883m summit of Klein Matterhorn, where we get an unusual perspective of the oceanic nappe while traversing a tunnel bored through green rock riddled with white veins — battle scars from the rock’s tortuous tectonic history. The tunnel continues through the glacial ice, giving you an excellent glimpse of its annual layers. We then descend from this summit to a lower station and start the Matterhorn Glacier Trail. It’s a delightful wander through mangled oceanic crust recently exposed by the retreat of the Theodul and Furgg glaciers, with the Matterhorn looming above you the entire way. The trail has interpretive signs describing the various oceanic rocks you pass en route, including dense, garnet-bearing eclogite and green serpentinite, the result of water being incorporated into the crystal structures of mantle and oceanic crustal rocks during metamorphism. At the end of the trail we return to Zermatt by cable car, and then on to Visp for a second night.

Day 7.  Area around Sion. Our first stop of the day is Saint-Léonard underground lake. This formed where a bed of Triassic gypsum, emplaced within impervious Carboniferous strata, was dissolved by groundwater. We then drive through the town of Sion, where we will later stay the night, to reach the Sanetsch Pass. Here we see a Tertiary unconformity marking the onset of the Alpine orogeny, 2000m high cliffs made of volcaniclastic turbidites and views of the famous Morcles nappe. We then return to Sion to see Valère and Tourbillon castles and to spend the night.

Day 8. Herens Valley. Today we take a day trip from Sion into the Herens Valley, to learn more about European/African suture with evocative geology that includes greenschists (oceanic remnants), and some of the most amazing glacial landscapes of Switzerland. We return to Sion for a second night.

Day 9. Views of Mount Blanc and  Lavaux Vineyard Terraces UNESCO World Heritage Site. In the morning we drive to Châtelard. Here take two different funiculars and a train to reach the Emosson Dam. The first has a gradient of up  87%, making it one of the steepest funiculars in the world! The panoramic train offers grandiose views of the entire Mont Blanc massif. The last funicular takes us up another 140m for even better views of Mt Blanc. Next we visit the impressive 200m deep Trient Gorge taking a walk through it before heading to Monthey to see two historically important galcial erratics Pierre à Dzo & Pierre des Marmettes. When then reach the shores of Lake Geneva, pausing for a photo stop of the Chateau de Chillon. Near to Lausanne we make a longer stop in the Lavaux Vineyard Terraces WHS. Here hard conglomerate layers and softer sandstone layers dating back to Oligocene sedimentation of large alluvial fans have been differentially eroded by the Rhone glacier and form a steepstair-like slope that forms the vineyard terraces. Finally we arrive back in Geneva for a final night of the tour.