Prices are per person, based on 2 people sharing a room. Single supplement applies, please make contact for details.

The Italian Volcanoes are the ‘Classic Volcanoes’ with a continuous record of observation stretching back into classical times when the area was at the centre of Western civilisation. Understanding the volcanoes has played a central role in understanding earth science itself. The GeoWorld Travel tour visits Vesuvius, Campi Flegrei, Lipari, Stromboli, Vulcano and Etna, the eruptions of which have not only shaped the course of history but also lend their names to some of the classic eruption types. In fact, Vulcano lends its name to all volcanoes worldwide. Vesuvius, with nearly one million people living in its shadow, is perhaps the most dangerous volcano on earth, a fact we are grimly reminded of when we tour the Roman towns of Pompeii and Herculaneum, both of which were destroyed by devasting pyroclastic flows. The tour is linear, starting in the hustle and bustle of Naples and ending in Catania, Sicily. Transportation is very varied including walking, train, ferry, hydrofoil, taxi, car, cable-car and 4x4 truck, all of which makes for a classic adventure in the land where vulcanology was born. 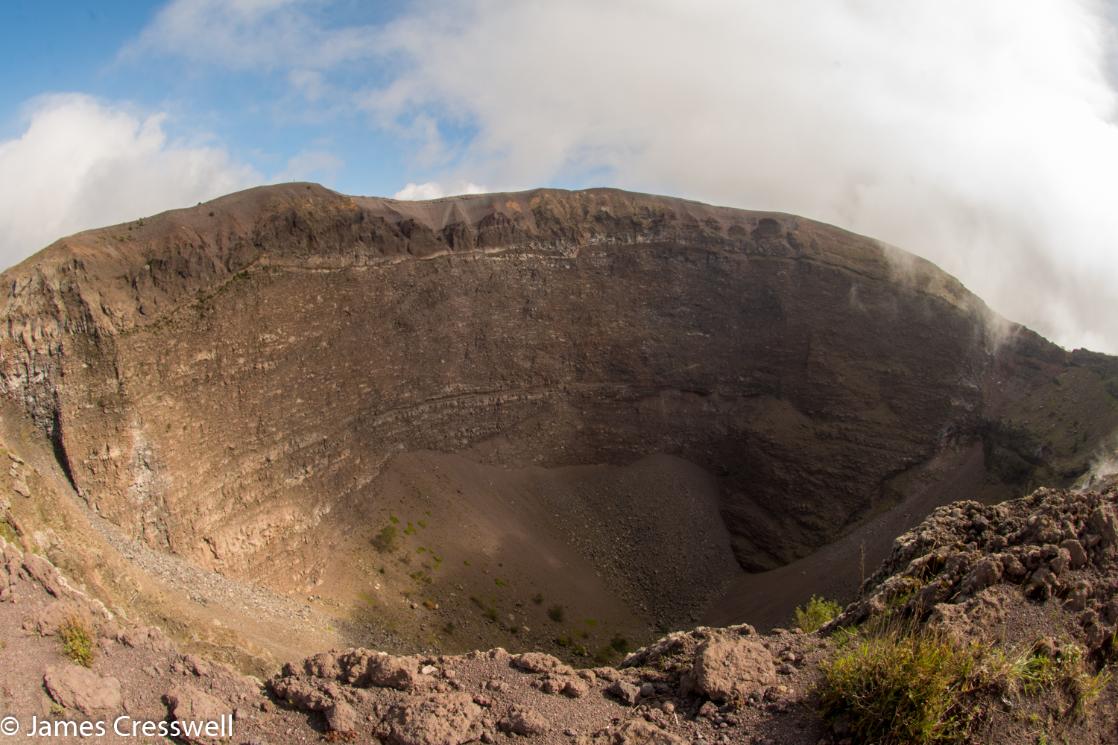 The view into the summit crater of Vesuvius volcano (Day 2) 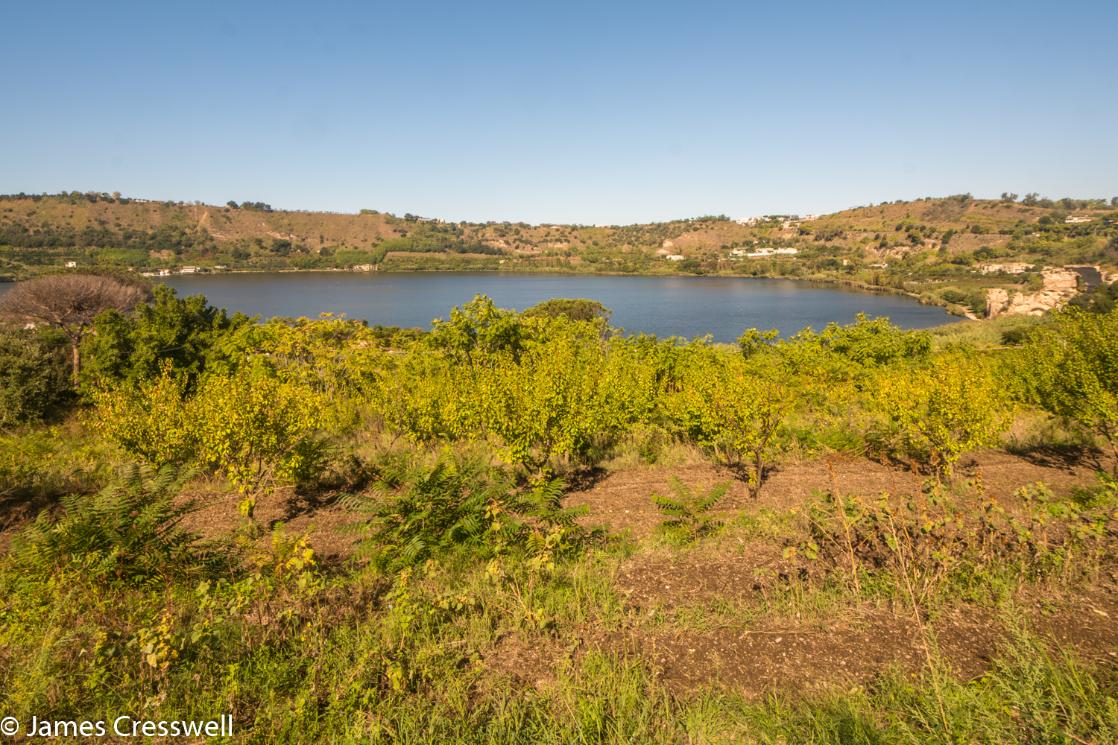 The Largo Averno crater lake in  the Campi Felgrei caldera, the lake was once believed to be the gateway to the kingdom of Hades due to C02 emissions that killed birds that flew over it (Day 3) 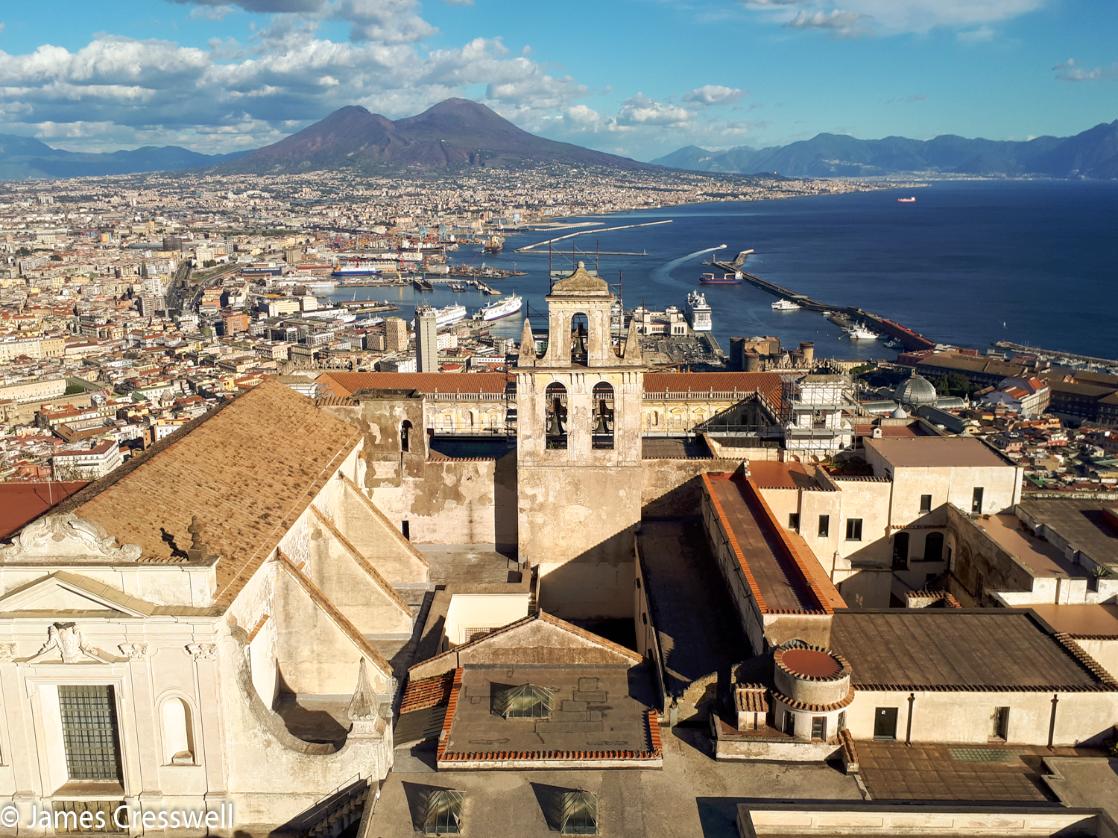 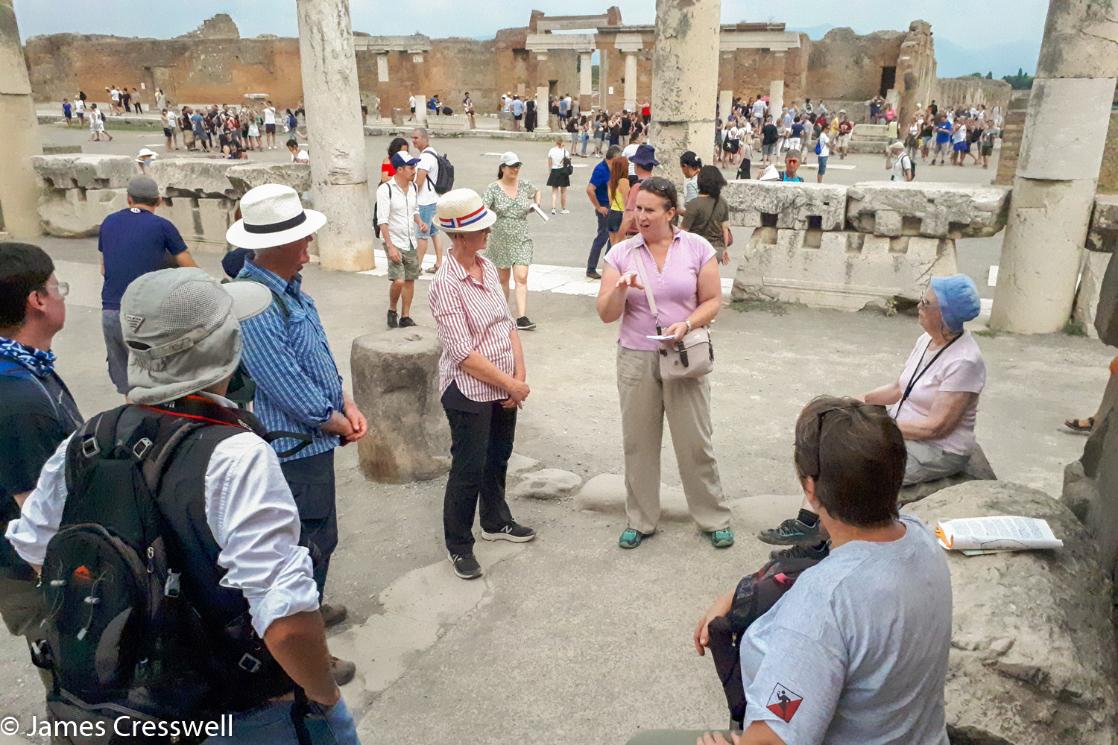 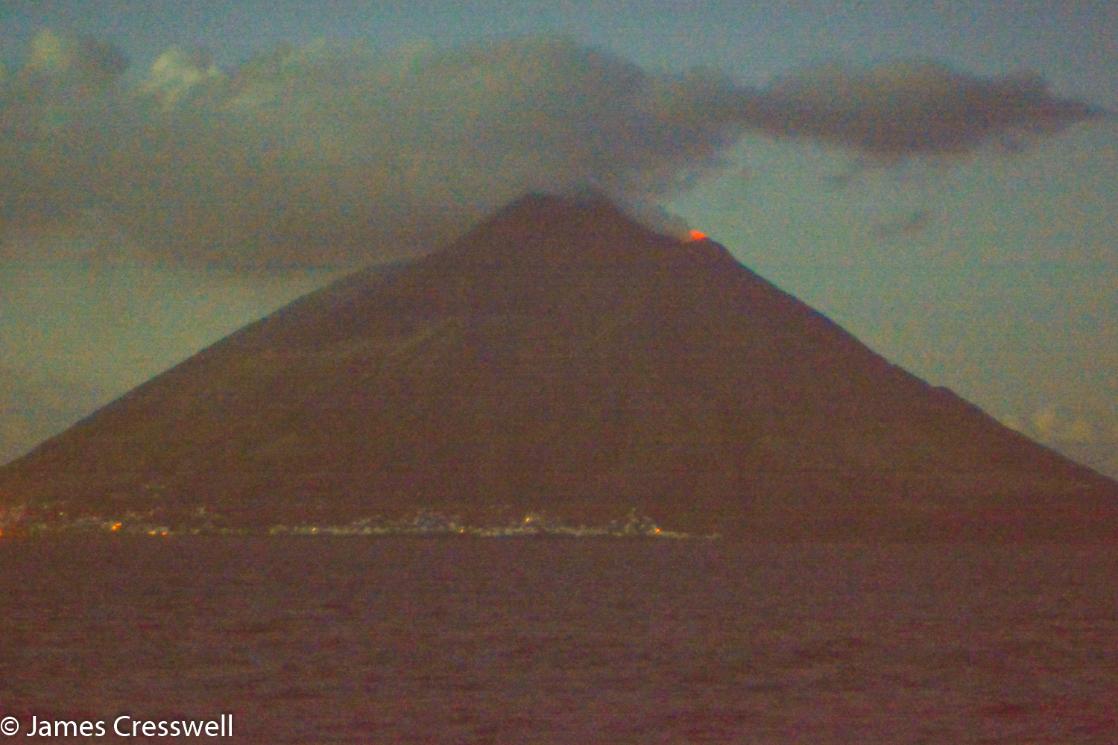 Stromboli viewed from the overnight Naples to Lipari ferry. It is possible to see erupting lava. (Day 5 early hours) 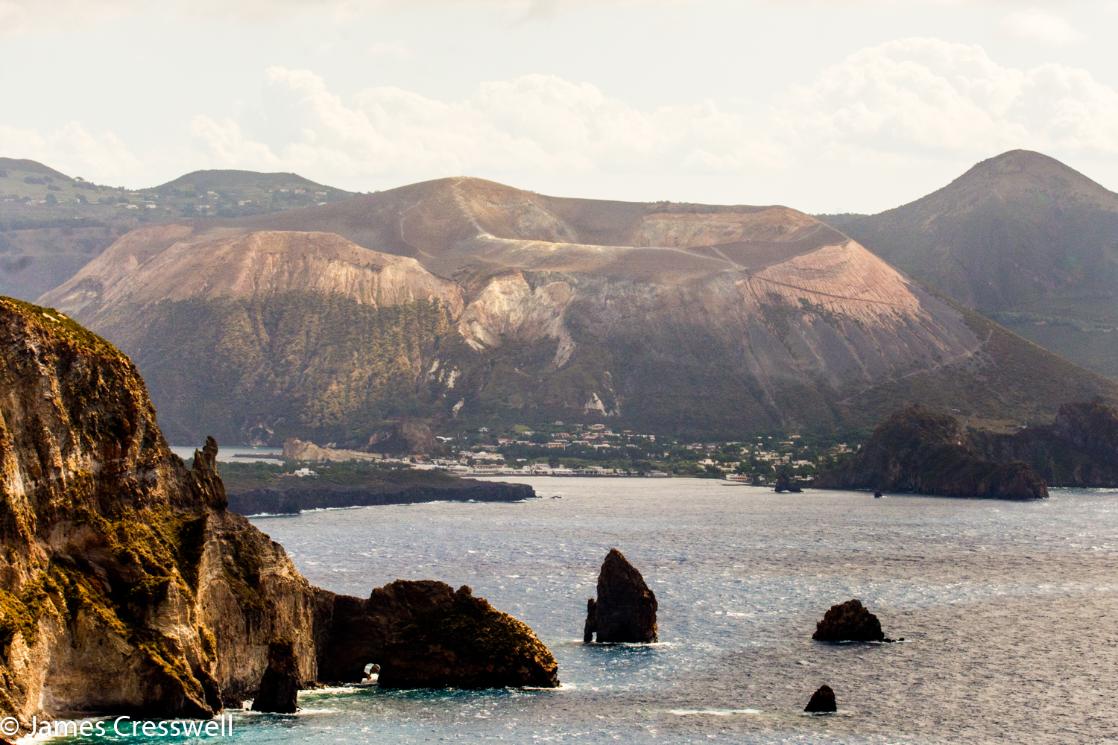 The view of Vulcano Island from the island of Lipari. Vulcano is the 'orginal volcano' and lends its name to all the world's volcanoes. (Day 5) 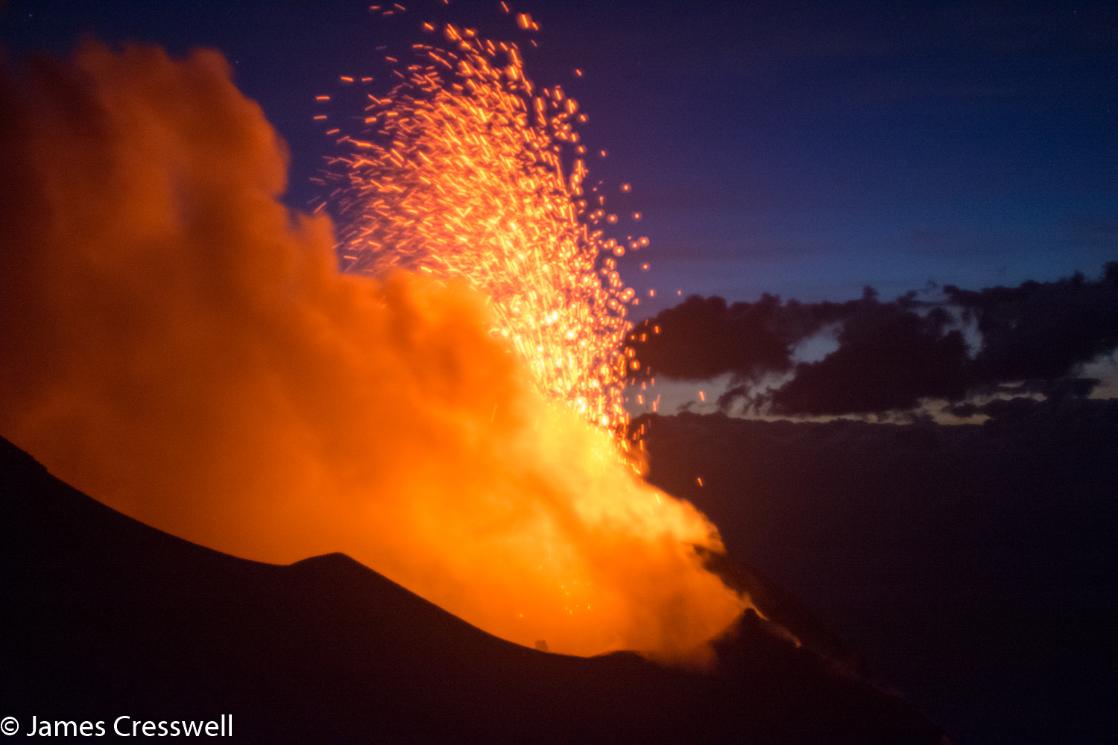 Eruptions of Stromboli volcano taken on the optional night time Stromboli summit hike. Stromboli 'lighthouse of the Mediterranean' has been in a continuous state of eruption since classical times and lends its name to the Strombolian type eruption. (Day 6) 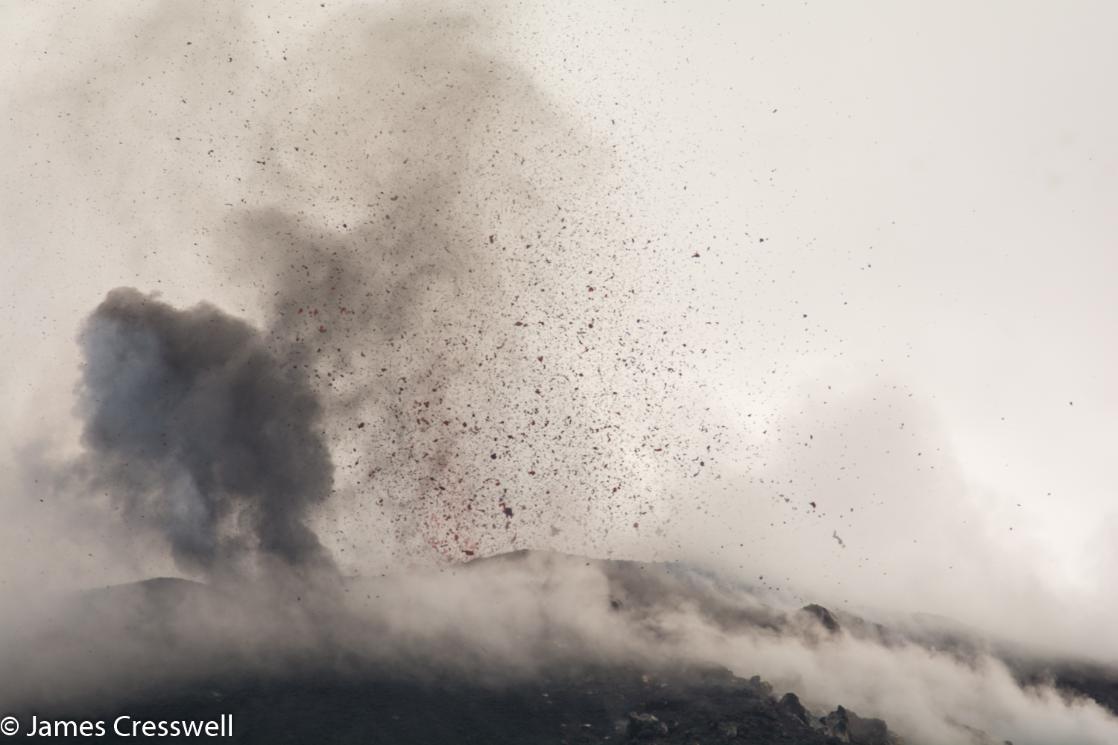 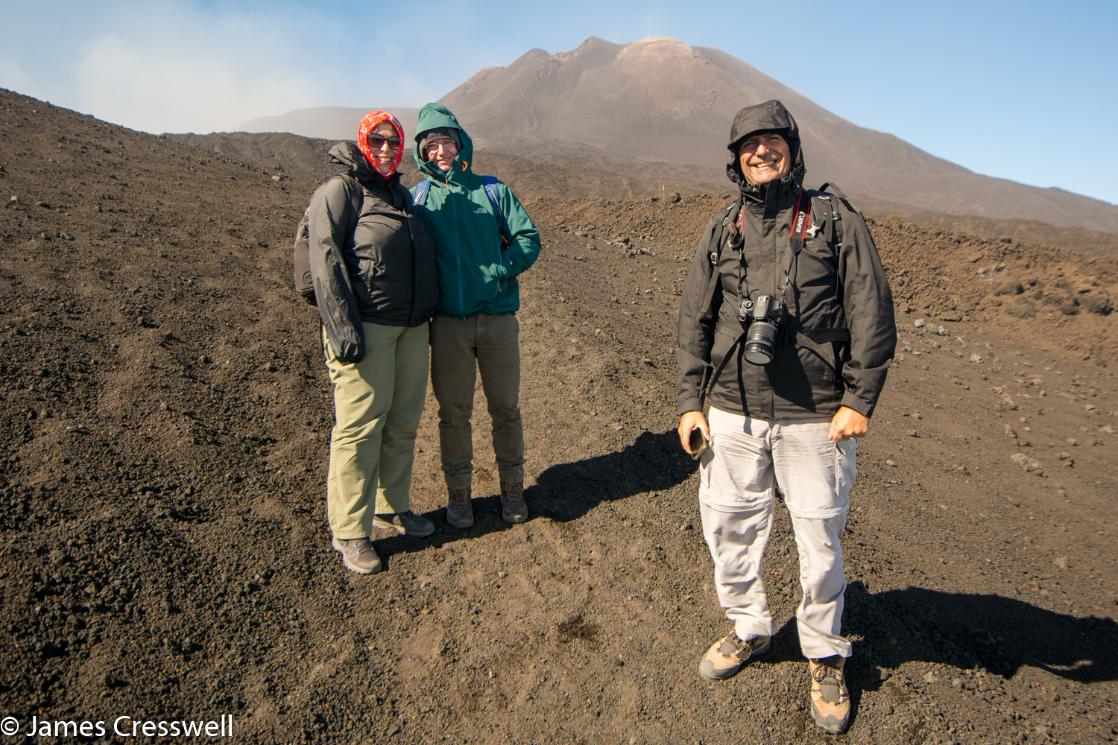 The summit of Mount Etna volcano on Sicily (Day 8)

Day 1 - Arrive in Naples. We spend the night in the city.

Day 2 - Herculaneum World Heritage Site and Mount Vesuvius. Our first stop is the ruined Roman city of Herculaneum at the base of Mount Vesuvius volcano. The city, a World Heritage Site, was buried by pyroclastic flows from the volcano's eruption of 79 AD. The site has exceptional preservation due to the depth of the pyroclastic deposits, allowing  wood and other organic based objects to be preserved. In the afternoon we take a tour bus to the Parco Nationale del Vusuvio and walk to the summit of Mount Vesuvius itself.  At the summit we can peer into the crater, see active fumeroles and get magnificent views over the city of Naples.  We spend another night in our Naples hotel.

Day 3 - Phlegraean Fields Caldera, Naples. We travel by train and visit the Phlegraean Fields volcanic area, which is 15km west of Naples. Lying mostly underwater, the area of the caldera comprises 24 craters and volcanic edifices. In the morning we take the train to Pozzuoli Solfatara station and walk for 15 minutes to the  Solfatara crater, the mythological home of the Roman god of fire, Vulcan. Here we see hydrothermal activity and gaseous emissions. From here we walk for another 15 minutes to see the Flavian Amphitheater, the third largest Roman amphitheater in Italy. We then walk on for another 15 minutes to the Temple of Serapsis in Pozzuoli . This 'temple' was a Roman Market and features on the front cover of Charles Lyell's Principles of Geology published in 1830. The pitted surface of the temple's columns, caused by marine molluscs, tell us the land has subsided and risen again due to the swelling of the magma chamber beneath. After lunch we take the train for another 15 minutes to reach Arco Felice and from here it is a 15 minute walk to  Monte Nuovo. Monte Nuovo is the site of the most recent volcanic activity in the Phelgraean Fields. It is a scoria cone that erupted in 1538. We climb to the crater rim and learn about its eruptions and get great views of Largo Averno, a lake filling a neighbouring crater. The lake's name means 'the lake without birds' due to its CO2 emissions and it was considered by the Romans to be the entrance to Hades. We then take the train back to Naples where we spend another night, en-route to the hotel we can optionally visit Castel Sant'Elmo for panoramic views of the city and Vesuvius.

Day 4 - Pompeii World Heritage Site , Naples. In the morning we travel by train and visit the Roman ruins of Pompeii which were also destroyed by an eruption of Mt Vesuvius in 79 AD.  Pompeii is much bigger than Herculaneum and it needs more time to visit. We will spend the morning together in Pompeii. In the afternoon you have the option of additional time at Pompeii or free time in the Historic Centre of Naples which is also a World Heritage Site. We will rendezvous at our Naples hotel at the end of the afternoon to collect our bags and will travel by taxi to the port of Naples, where we will take an overnight ferry to Lipari. Our onboard accommodation will be in cabins.

Day 5 - Lipari.  The ferry docks in the morning and we spend the whole day on Lipari.  We drive to the north of Lipari island to see obsidian flow and pumice deposits from Monte Pilato, and then we visit Quattrocchi on the west of the island, which has a stunning view. We can descend via a coastal path to the beach, passing layered ash and lava deposits. We then return to Lipari town where we spend the night.

Day 6 - Lipari and Stromboli. Free morning in Lipari town with the opportunity, if you wish, to visit the Old Town and Castle, in which the local museum is based with its displays on the colonisation of the islands dating back to Neolithic times, around 4000BC. We take the hydrofoil over to Stromboli, leaving around midday, with a stop at Panarea to take a picnic lunch. We arrive on Stromboli island in the late afternoon and then take a steady climb to the top, accompanied by local guides, reaching the summit at dusk*. We will then spend time there watching the spectacular eruptions of Stromboli by night, before returning to the town. Those who do not feel up to the climb may wish to watch the eruptions from below by taking a short low-level walk to the Observatory (a pizzeria with a terrace giving good views of the eruptions). We then take the boat back to Lipari where we spend a second night.

*Due to current high levels of volcanic activity (Jul 2019), all hikes to the summit of Stromboli have been suspended - it is possible that this suspension will last until 2022. While this is the case, the group will view the volcanic eruptions from a boat, and James can lead a hike for the fitter members that goes one third of the way up the volcano where the views are still pretty good. The photographs in the 2019 Travel Diary where taken from a boat and this lower viewpoint.

Day 7 - Vulcano. In the morning we take the hydrofoil to Vulcano, the island and volcano that lends its name to all the world's volcanoes. First we climb the spectacular summit crater and see fumeroles and lava flows, and then we descend and bathe in bubbling hot springs and mud pools. At the end of the day we take the hydrofoil to Milazzo on Sicily where we spend the night.

Day 8 - Mount Etna. Today we visit Mount Etna volcano. We drive to the Rifugio Sapienza and then take the cable car and four-wheel drive bus to a place near the south-east crater. From there a guide will walk with us to near the summit of the volcano. On our way we will see lava flows, steaming vents and fumeroles. We spend the night in Catania.

Day 9 - Depart from Catania. There are direct flights from Catania to the UK and many other destinations. It is also possible tofly or take the train back to Naples.

Transportation from destination to destination, either by train, ferry, cable-car or car

Entrance to all attractions except those visited on free time

Shuttle from Catania Airport Hotel to the Airport

Bus from Naples Airport to hotel

This tour is also packed with Archaeology

(calculated at https://www.carbonfootprint.com/calculator.aspx and using a rate of 0.12 kg/km for ferry/boat travel)

A summary the trip with captioned photos 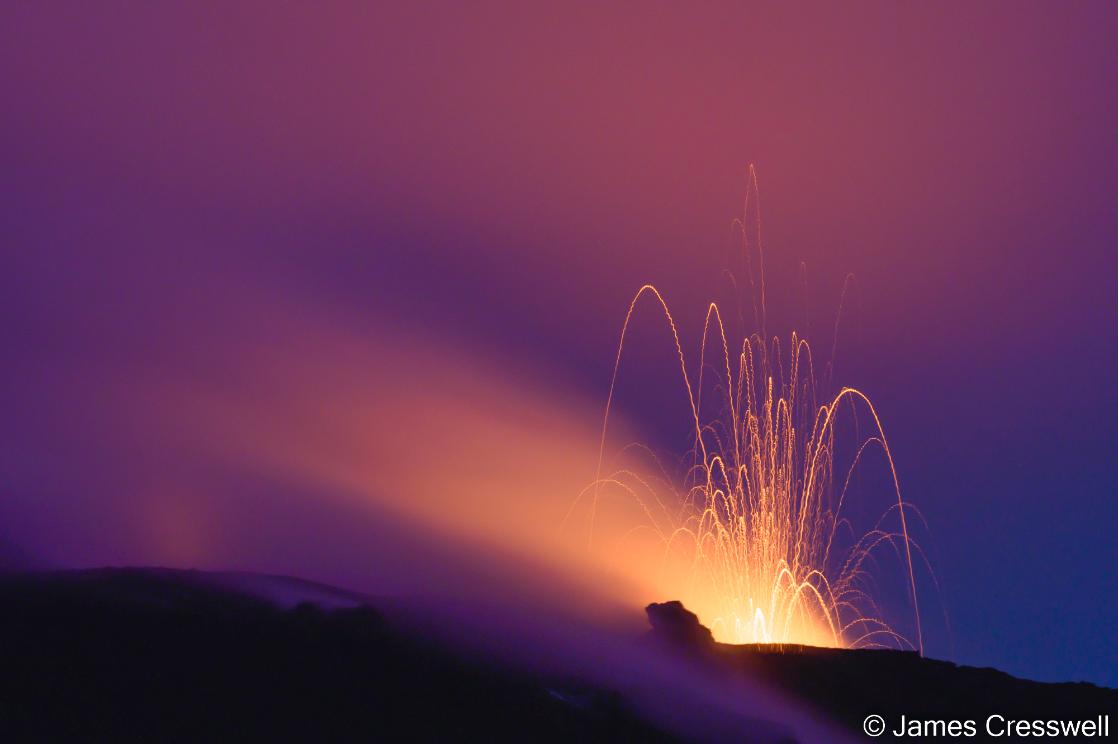 A day by day account of the trip with captioned photos 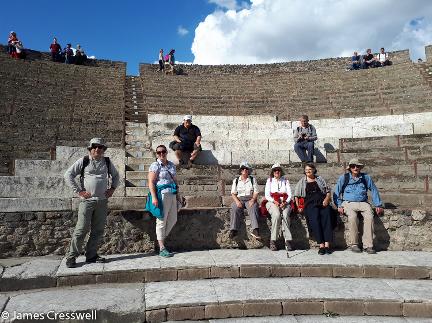 This trip occurred two months later in the year than the current schedule, this is why Etna is snow covered

"Group (ideal size) of 8 people visiting several active Volcanoes with James Cresswell,(Geologist) and Abby (Archaeologist). Very well organised, before and during trip.Excellent, enjoyable and informative for knowledgeable people as well as 'beginners'.(me). Loved it!! Looking down into Vesuvius to watching Stromboli burst out fiery explosions every few minutes.And learning something new all the time from James who could answer anything Geological! We were looked after very well all the way, so thank you James and Abby"

Review was posted to TripAdvisor, November 2019

"The trip was excellent, and James was very knowledgeable about the various volcanoes we visited. I would recommend this trip for anyone interested in volcanoes."

Review was submitted by email, November 2019

"A great week led by James visiting Vesuvius, Herculaneum, Pompeii, Stromboli, Etna and more. Good size group of 7 with a variety of knowledge.  Amazing to see Stromboli erupting even if I took the option of viewing from a boat rather than the walk up - next time, eh James?! Etna took my breath away - what power - not to speak of the most amazing sight of inside Vesuvius' most recent cone. James never tired of all my questions - and I had a lot. It was so good to have his knowledge and experience on hand. Thank you also to Abby of GeoWorld who explained the history of Herculaneum and Pompeii. I would recommend GeoWorld to anyone who would like to find out more - check out their trips. Thank you!!"

Review was posted to TripAdvisor, December 2018

"A great trip. The amazing landscapes were brought to life by James's explanations. Climbing Stromboli at dusk to see the eruptions was the highlight of the trip, but every day was great. James was always cheerful and good company."

Review was posted to TripAdvisor, November 2017