(Based on 2 people, price is reduced with more people. Full pricing info is on our Booking and Prices page)

Number of places: 2-6 (or more if using your vehicle)

The Fforest Fawr Geopark is a UNESCO Global Geopark, and is also where GeoWorld Travel is based. The rocks range in age from Ordovician in the north west of the geopark to Carboniferous in the south. The geopark town of Llandovery lends its name to the Llandovery epoch of the Silurian. The Devonian rocks form the Black Mountain and Brecon Beacons which are the highest mountains in the southern Britain. The Carboniferous rocks contain the largest cave network in north west Europe, and coal and iron deposits which were of great importance in the industrial revolution. This tour takes in all these rocks as well as an impressive Variscan fold, a large fault, views of three castles and a beautiful waterfall/ 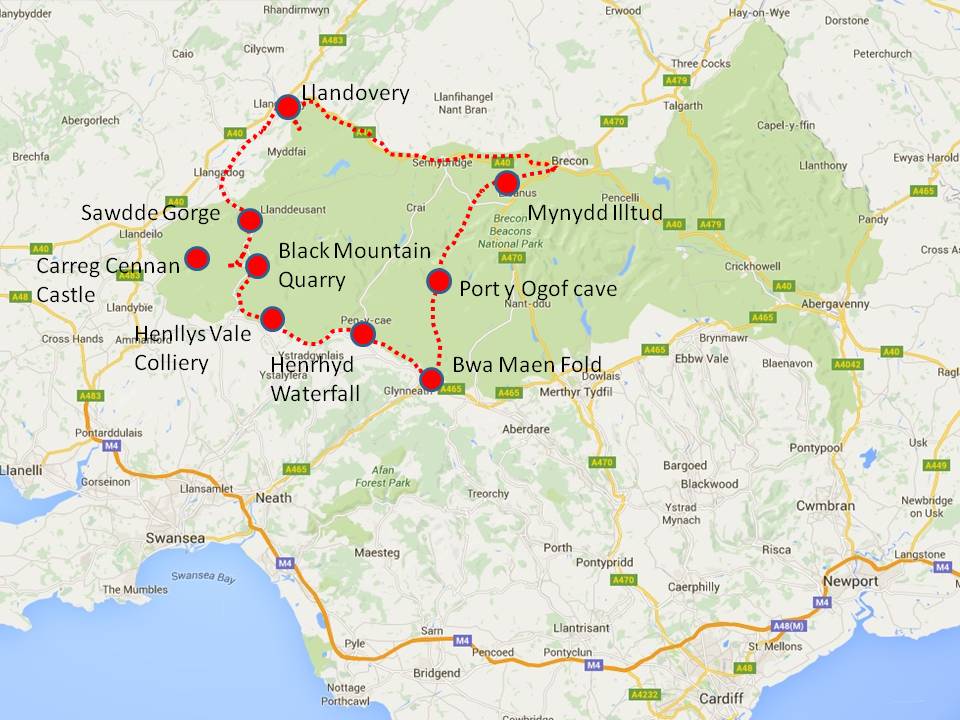 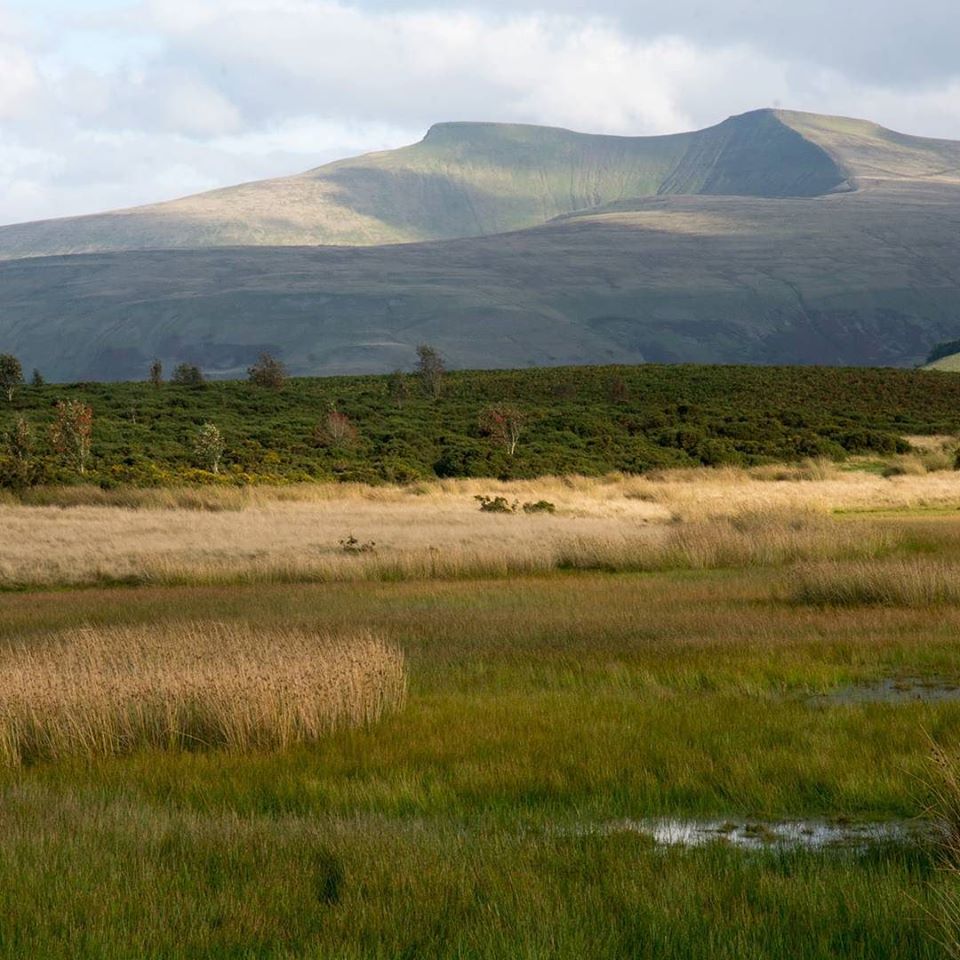 On Mynydd Illtud. A lake left by an ice-aged pingo in the foreground with Pen-y-Fan the highest peak in the Geopark and southern Britain in the background. 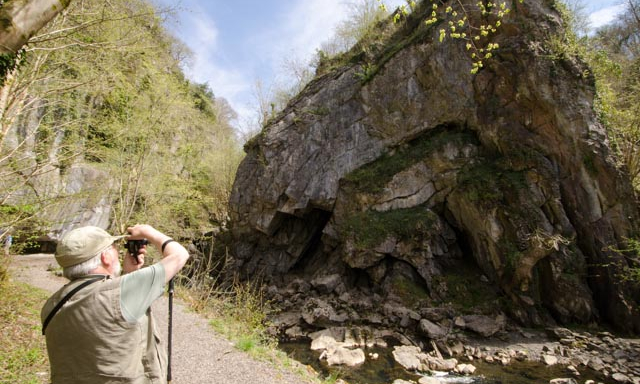 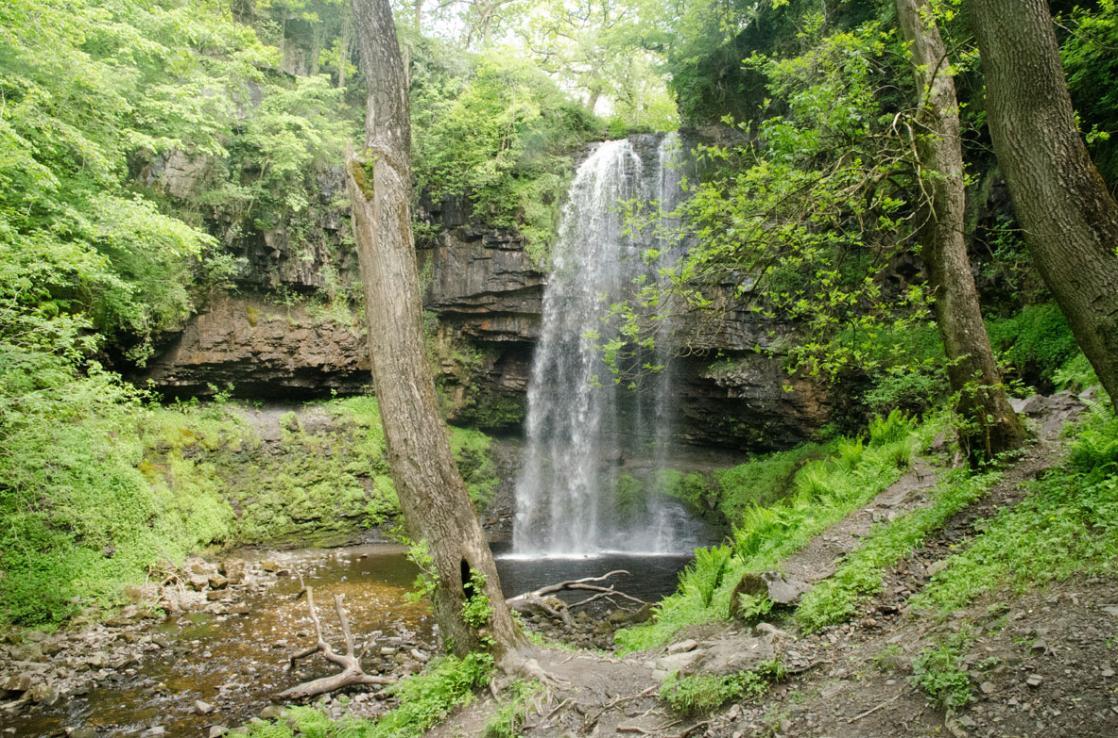 Sgwd Henrhyd the highest waterfall in the Geopark, which flows over the Farewell Rock 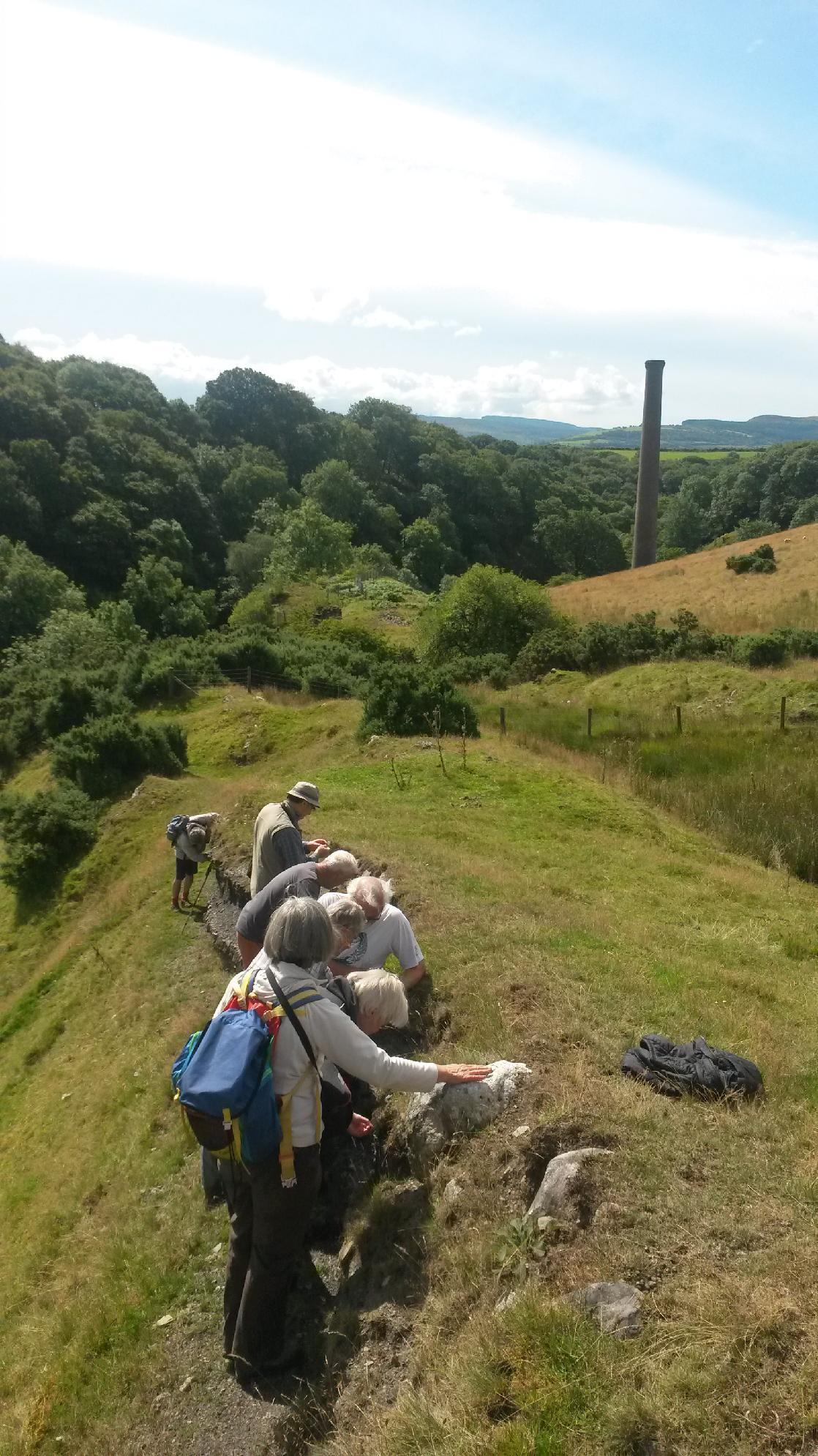 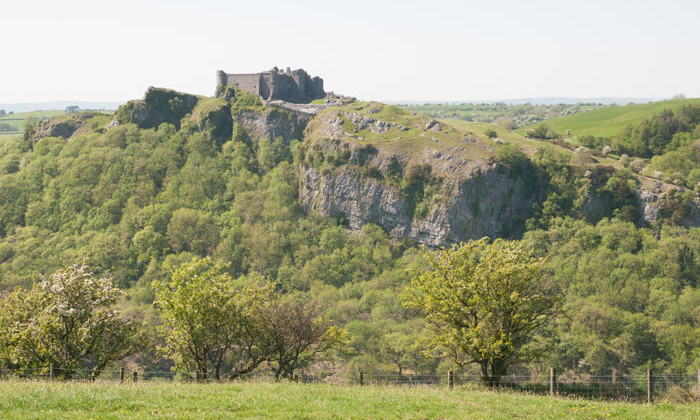 Mynydd Illtud - Spectacular views over all four mountain ranges in the Brecon Beacons National Park, a Roman road, an iron age fort, glacial moraine, and scientifically important wetland, and a lake formed by a pingo.

Maen Llia -  Our vehicle climbs a series of steep hairpin bends, known as the Devil's Elbow, with a magnificent view to reach Maen Llia - a Bronze Age standing stone, set in the wilds of Fforest Fawr.

Dinas Rock -  The 'fortress rock' a high promontory of Carboniferous Limestone that used to have an iron age fort on its summit. Legend has it that King Arthur and his army lay asleep within the rock ready to come to the aid of Britain if ever needed again.

Bwa Maen Fold - The 'Stone Bow' this is a spectacular Variscan fold in the Carboniferous limestone. It is a faulted anticline and rests against the Neath Disturbance fault.

Sychryd Falls/ Sgydau Sychryd -  This is a cascade of water that flows between Dinas Rock and Bwa Maen.

Pontneddfechan - In this village we see an outcrop of the Farewell Rock and some fossil trees.

Henrhyd Waterfall - This is the highest waterfall in South Wales which flows over the famous 'Farewell Rock', the bottom layer of the South Wales Coalfield. When early geologists first described it, fossil tree trunks were found at its base.  The waterfall was filmed as the entrance to the Batcave in the film 'Batman Returns'

Henllys Vale - We walk for approximately 2.5 miles in total, on a flat former tram way. At the furthest part of the walk is the Henllys Vale colliery. Here we can see coal and iron stone nodules within the rock layers. We can also see river channel sediments. The site is also impressive for industrial archeology with the engine house chimney and lime kilns to be seen.

Herbert's Quarry - Set in a stunning location on Black Mountain with panoramic views this is a large area of abandoned limestone quarries.

View point of Carreg Cennan Castle and distant Llandeilo - This castle has recently been voted the most romantic ruin in Wales. The Castle was built by the Welsh of Deheubarth in 1197, and later changed hands between the Welsh and English several times. The castle stands on a crag of Carboniferous Limestone trapped between two faults forming part of the Carreg Cennen Disturbance. Additionally in the far far distnace the town of Llandeilo can be seen. This town lends its name to the Llandeilian of the Silurian and in the grounds of its castle Dinefwr the first trilobite known to science was discovered.

Sawdde Gorge - We briefly stop at this SSI where important Silurian and Devonian fish fossils have been found. It is also possible to see marine Silurian rocks grading into terrestrial ones.

Llandovery - Llandovery is famous to geologists the world over for lending its name to the Llandovery series of the Silurian. In the town we visit the ruined  Norman Castle with the earliest construction in 1116.  It changed hands between the Welsh and English many times in its history and was finally burnt by Hywel ap Rhys in 1532. In the castle car park we can see fossil ripples in the flag stones. We then drive a mile out of town to see the type section of the Telychian stage of the Llandovery series. It was named after the near by Pen-lan-Telchy farm.

Geology of the Fforest Fawr Geopark 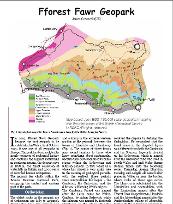 Read more about the geology of the Geopark, download James' article here 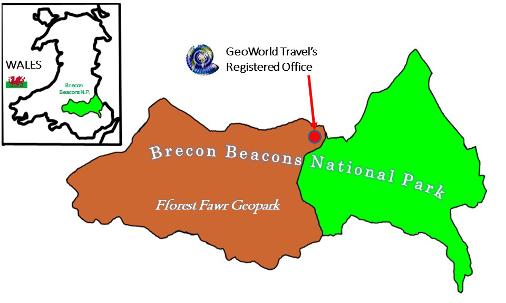 GeoWorld Travel is located within the Fforest Fawr Geopark 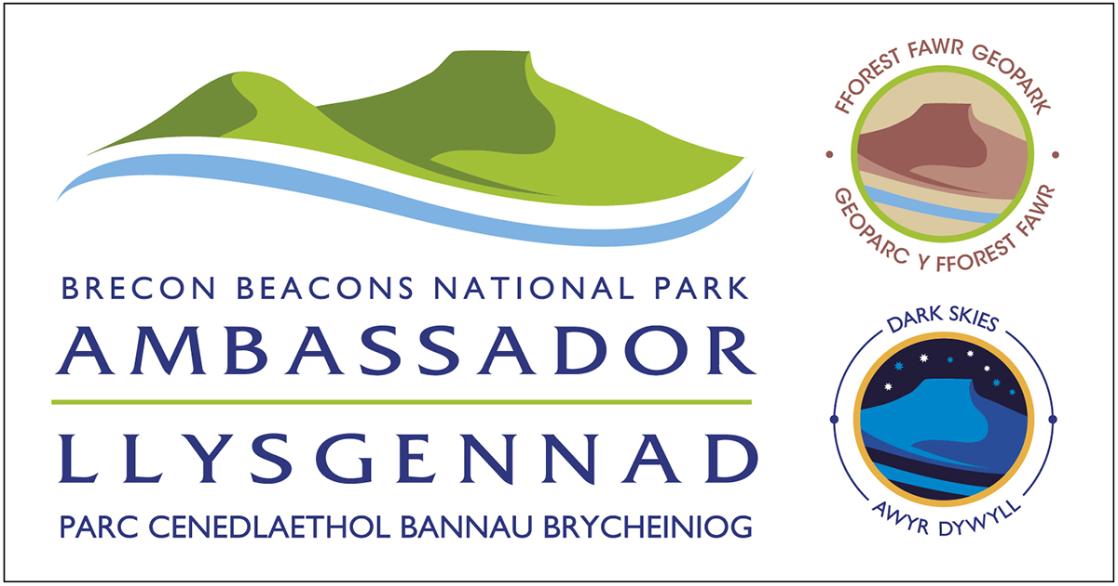 A short video about the Black Mountain Limestone Quarries, which we visit on this tour